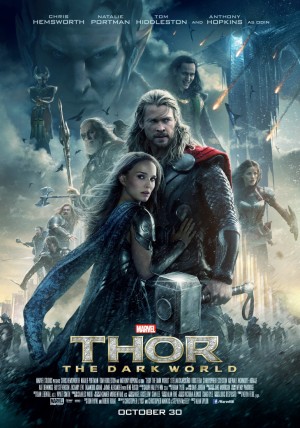 Sequels can be scary. They can be scary for actors who are called back to reprise roles, they can be scary for writers, directors, and even producers, who collectively are banking a lot on a movie with the hope that they can catch lightning in a bottle a second time. Lastly sequels can be scary for the audience who are hoping to be as equally entertained, as they were when they saw the first film of whatever franchise they are now following. I’m sure all of these things were running through the minds of everyone involved with Thor: The Dark World, the sequel to the 2011 film Thor.

Just as the previous film was released two years ago, this story picks up two years after the events of Thor, and one year after The Avengers, and we see that all is not necessarily well in the Nine Realms. War has broken out all over the cosmos and it’s up to Thor and his band of fighting friends to help restore order. We also learn, that as great is the power of those of Asgard, there is an even greater threat, and it is a race known as the Dark Elves, beings who existed prior to the creation of the Universe as we understand it today, and who wish to return it to that earlier state.

What follows is destruction and carnage that would excite any action/adventure movie fan.

Here we see, that despite whatever power the Asgardians possess, the power of the Dark Elves is unmatched, and they threaten to become unstoppable should they get there elvish hands on an energy source simply known as Aether. In the process of trying to reclaim this power we see casualties that can almost be regarded as heartbreaking. This element is one of the movie’s greatest strengths. It just doesn’t give us more bang for our buck, or flashier action. It gives us heart, and when we see someone killed from the conflict between the Dark Elves and Asgard, we also get to see the emotional ramifications that come from that death. Here we learn that the “gods” of Asgard are just as mortal as us mere humans, and that they also grieve just as we do.

The other strength of this movie is its humor. Jokes in a film like this are tricky and can take away from the emotional weight being conveyed, but in this movie the humor is very well placed and never overdone, and the greatest source of that humor is Loki, played by Tom Hiddleston. He shows us a Loki who is bitter about the punishment he has received as a result of his actions in The Avengers, as well as a thoroughly angry and vengeful “god” as a result of a personal loss he is forced to suffer, and throughout all of that he shows us a humorous Loki which only further emphasizes who he is, and that is the god of tricks.

Thor: The Dark World gives us quite a few surprises ranging from some outrageous, but never out of place, behavior from certain characters in the movie, as well as a very surprising cameo which completely caught me by surprise. I truly never saw this one coming. However, the visual meat of this movie is the action, and there is certainly plenty of it. The cataclysmic battle towards the end of the movie is very well put together. At no time did anyone have any difficulty following the action, and even though it was (quite literally) hopping all over the place, it was still presented in a very linear fashion that was very easy for the audience to follow, and never did it create (at least for me) a feeling of sensory overload, or even nausea from “shaky camera syndrome.”

While the acting isn’t necessarily Oscar worthy, all of the performances are solid enough so that I could lose myself in the film. A great plus was to see an expanded part given to Idris Elba as Heimdall. He has always been great to watch, and seeing him as a man of action as well as thought helped to make this the solid movie that it is. Special note again must go to Hiddleston: it was widely reported that during production of this movie more scenes and dialogue were written for Hiddleston because of what he was delivering during filming. It’s a good thing because he showed us a humanity that changes him from being a villain to more of an anti-hero.

As with all other Marvel movies it is necessary to stick around through the credits, and it is important to stay through ALL OF THE CREDITS. Do not leave after the house lights come up, or you will be sorry!!!

Marvel has done something amazing here. They had enormous success with the sequels of the Iron Man franchise, and here again they have success with Thor. As I said before, sequels can be very scary, and that is definitely the case here as this movie is just that “scary good!!!”