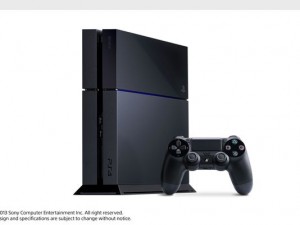 Sony has made the first big splash of the E3 expo with its unveiling of the Playstation 4.

The new console, which will hit stores later this year, delivered an early punch to the competitor Microsoft and the upcoming XBox One.

The PS4 will retails for $399, a hundred bucks less than an XBox One will set you back.  It also will allow users to play used games and rent games more quickly than the competing console.

During their Electronic Entertainment Expo press event, Sony Computer Entertainment of America president and CEO Jack Tretton says its PS4 will not restrict used games, nor will it require an online connection.

Tretton specifically noted the PS4 “won’t stop working if you haven’t authenticated within 24 hours,” a jab at the Xbox One and its requirement to perform online checks of consoles.

The Sony news follows published items posted last week by Microsoft detailing how certain features of the Xbox One would work. Early reports from Microsoft indicate there could be limitations on lending games to friends and restrictions on renting titles for the few weeks or months of their release. The console will also require an online check every 24 hours. If not, players cannot use the device online.

Shuhei Yoshida, president of Sony Worldwide Studios, unveiled a couple of titles that will be available for the PS4 when it hits stores for the holidays.

Yoshida also showed new snippets of the games highlighted at the PS4’s reveal: Killzone: Shadow Fall, racing effort Drive Club, cute platform effort Knack and InFamous: Second Son – the latter looked pretty stunning. It’s debatable, though, whether any of those count as console-sellers. It appears that we will have to wait a while for Sony’s killer IPs, like Uncharted, God Of War, LiitleBigPlanet and Shadow of the Colossus, to make it to the new console.

Sony will have long-term partnership with Bungie and Activision, but doesn’t detail exactly how that will work.