Star Trek fans who wish to indulge their thirst for the final frontier have a couple of new options available to them. 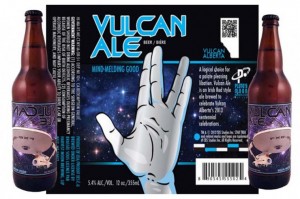 Canadian beer importer Delancey Direct is teaming with CBS to begin distribution of the beers later this year.   The company plans to introduce a Klingon-themed beer and another Trek-inspired lager this year as well.   There could also be future “seasons” of brews that fans could purchase in themed-packages.

The Trek themed beers are only available in Canada at the moment, but they could move south to the United States if demand is there.

But if beer isn’t your thing, maybe you’d like to sip a little wine from the final frontier.

Wine retailer Vinport is currently taking pre-orders for bottles of three new Star Trek themed vintages of wine.  The wines feature labels by artist Juan Ortiz that commemorate the episodes “Mirror, Mirror,” “City on the Edge of Forever” and “The Trouble With Tribbles.”   Assuming you open the collectible wines, you’ll find a blend of red wines from Sonoma, California’s Viansa Winery. Vimport describes the wine as “a special blend of Merlot, Sangiovese, Cabernet Franc, Dolcetto, Tinta Cao, and Tempranillo. The blend comes together to create a medium-bodied, easy drinking red wine that is full of depth and character.” 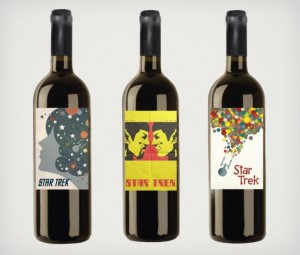 You can pre-order a bottle, three bottles or a full case of the wine. A bottle will set you back $24.99 and there is a $20 shipping charge. Orders will be taken for the next 50 or so days but the site warns us that quantities may be limited. So, if you’re interested you may want to order now.

And for those of you who are wondering, no, we will not be reviving a certain show in order to test the new Star Trek beer or wine.