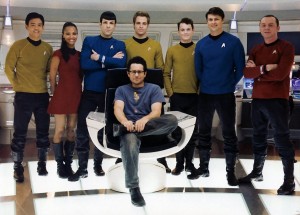 A year after the Star Trek reboot, Pocket Books was set to publish a series of novels set in the rebooted Star Trek universe. Release dates and authors were posted on Amazon, but as the date grew closer those titles vanished and haven’t been heard from since.

If you were left wondering what happened to them and why the Trek reboot has only been delved into in two movies and some tie-in comics, you can blame the business side of things. According to a long article in TheWrap, director J.J. Abrams and his Bad Robot production company initially had big plans for the reboot of Star Trek. According to an inside source, Abrams and Bad Robot wanted to phase out tie-in merchandise based on classic Trek and replace it an ambitious multi-media reboot of the Trek universe that would have included television, digital entertainment and books.

Why didn’t it happen?

“J.J. just threw up his hands,” a source tells TheWrap. “The message was, ‘Why set up all this when we’ll just be competing against ourselves?’ The studio wanted to please Bad Robot, but it was allowing CBS to say yay or nay when it came to what was happening with the Star Trek products.”

CBS and Bad Robot have worked together on a limited scale — there is an upcoming Trek tie-in game set in the rebooted universe.

But it looks like it could have been a lot more ambitious in nature had all three parties been able to agree.

Ian Doescher on Shakespeare and Science Fiction
The DS9 Documentary "What We Left Behind"
Star Trek: The Original Series: "A Celebration"
Reviewing "Star Trek Beyond"