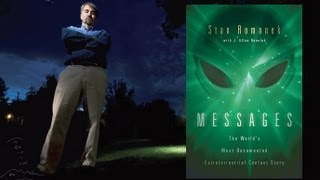 I have just completed reading two books by Stan Romanek. I am in the process of reading his third tome. The first two were “Messages: The World’s Most Documented Extraterrestrial Contact Story,” and the other is titled “Answers.” The third book that I am nearly finished with is called “The Orion Regressions” and deals with hypnotic regression therapy sessions that Romanek underwent as he channeled an alien being nicknamed “Grandpa.”

For those unfamiliar with Stan Romanek and his story, his case(s) of extraterrestrial visitation and abduction are probably the most celebrated and well documented in the annals of UFO study. What makes his story so intriguing is the mountainous amount of information, eye witnesses from credibile sources, physical evidence that to-date no one has been able to positively refute or shown to be fake or humanly manufactured, and most importantly, his ability to write out scientific mathematical equations so refined and exact that modern day quantum physicists are left stunned. All this from a guy who is so dyslexic his children needed to read to him and he has about a 5th grade level understanding of mathematics. His alien visitors gave him the formula for element-115 two full years before it was discovered by Russian scientists and two physicists from the University of Nebraska and MIT have been working with Romanek on formulas given to him that may well change the way we travel through space-time. It’s pretty intriguing stuff — on the surface of it all. However, after reading most of his regression book I was left with some intriguing questions of my own. I have written Mr. Romanek about these and hope to hear from him one day about those that I posed.

One of the things I found most interesting during his regression therapy as Stan was channeling (I don’t know what else to call it) the alien entity called “Grandpa” was the vagueness at which this entity would answer certain questions. The questions asked would deal with humanity’s role in the greater galactic scheme of things, or specific scientific inquiries that would come from a scientist brought end to question “Grandpa.” The alien’s answers were almost always “That is not important.” Well, the answers were pretty damned important to the humans asking them, and they were pretty important to me as a human reader. It would seem that the alien was intentionally holding back and would even say at times that it wasn’t allowed to reveal certain things due to some vague galactic laws that prohibited interference in human development (sort of like Star Trek’s Prime Directive). Yet these same aliens (and other aliens it was also learned) have no problem abducting human beings, taking samples from their bodies, practice genetic engineering and creating cloned offspring from their DNA, for whatever purposes, again not important enough to humans for “Grandpa” to relate. This alien’s level of nonchalance over human concepts of feelings, self-worth and what is considered important was staggering to me, yet, it was almost emphatic in stating that it and it’s “federation” were here for the good of all humanity. I found its attitude to be belittling, more extreme than what a human holds for lesser species on Earth, and quite condescending. Every time I read “Grandpa” say things like humans are too hostile, not evolved enough for that information, think too linear, too childlike in our ability to comprehend the deeper things and so on, I kept realizing how little these aliens really do understand humanity and left me with questioning their true intent, motivation and agenda. I suppose, as “Grandpa” did with a certain member of Stan’s group, it would label me as paranoid when in reality, I am questioning the evidence it is supposedly feeding us through Stan. This alien and his group of like-minded space pals have obviously not ran across folks like myself and so many others that were raised on the genius of Einstein, or the words and creations of Roddenberry, Asimov, or the holographic theories of Goswami or Stephen Davis. Perhaps they need to expand their client base and stop by to visit us and realize that we have no problem understanding or accepting the ideas and concepts of non-linear time and space, or, the ability to grasp such concepts as traveling faster than the speed of light, or bending space and time, or realize that time isn’t what we normally think it is and that there are millions of us humans who already know that we are not the only living, intelligent beings in this or any other multi-dimensional or holographic universe. “Grandpa,” stop by and visit and perhaps we could even teach you a thing or two about what it means to be a human with unlimited potentiality.

What I did find fascinating in the discussions presented by this alien is the idea that they and other alien species find humans enthralling because unlike so many others in the vastness of space we humans have a spirituality that is lacking in others. In fact, it is this one factor about humans that has led most aliens to drop by and visit, abduct, prob, research and investigate the human species. They are thoroughly baffled by our spiritual enlightenment and how it is opposed by our self-destructive tendencies and our ability to grasp that which is ungraspable to nearly all other aliens “out there.” I can tell “Grandpa” one thing for sure. They will never discover this spirituality by probing a human’s physical insides, or mutilating our cows and sheep, or by probing our testicles, ovaries or genome. We have found that you either have been imbued by your Creator with a spiritual life or you have not. According to the majority view from nearly every human culture down through the eons, humans were a special creative process and were given the very essence of its Creator and that is what separates us from every other species on Earth, and evidently from most species not of Earth if “Grandpa” is to be believed. So, sorry Gramps but you’re looking in the wrong place. You can’t find it if you don’t already have it within yourself…so, stop taking us humans against our wills and probing our anus’.

Finally, the other pet-peeve I had with “Grandpa” was its insistence that human beings are at a crossroads and if we don’t get it right we will be allowed to destroy ourselves. While I kind of agree with the idea that we humans appear to be bent on self annihilation and if it doesn’t happen by natural disaster, then we ourselves will likely be the cause, I don’t agree with the alien’s premise that they will not allow us to continue on this path should we opt for the destructive way. “Grandpa” claims that this so-called federation of like-minded aliens, while not actually causing our demise, will make it so we cannot leave this planet and spread our hostility and destructive ways to other areas of the universe. I found this to be a bit two-faced of the aliens because in the book “Grandpa” makes it very clear that “as it is down here, so it is out there,” in that as good and evil exist here on planet Earth among humanity, so good and evil exists in this universe and dimension (and other dimensions and universes). I found that quite telling and perhaps an indication of this and the alien’s true agenda, which is to keep us humans subservient or under their control, and not allow us to really spread our wings and fly as a part of the universal family. Why threaten humanity with the idea that they would not allow us to bring human hostility and agression to the rest of the universe (along with the one positive and stronger thing apparently lacking – true spirituality) when the universe already has malevolent entities galore along with so-called beneficent aliens? Is human hostility as much a threat to the existence of the rest of the universe as, say, the dreaded Reptillians or emotionless Greys of Zeta Reticule? I doubt that very much. So, what is the real agenda of the aliens of which “Grandpa” is a part?

“Grandpa,” if you want to really get to know us, understand us, and try to grasp our spirituality and our concept of a god then drop in, sit down, have a beer (or whatever beverage you prefer) and simply have a discussion with those of us truly evolved enough to not be afraid of you, your technology, your appearance. We do not fear you. We may not trust your true intention, but as you said to Stan, this is a good instinctual quality of humans to have so as not to be “conned” by every Tom, Dick and Harry alien that may try to steal a splice of human DNA. Oh, by the way, stop making clone-children from our DNA. We don’t like it, we don’t appreciate the invasion of our privacy and definitely don’t want our offspring, be they natural or in a test tube, being raised by the likes of you.

Hope to see you soon.