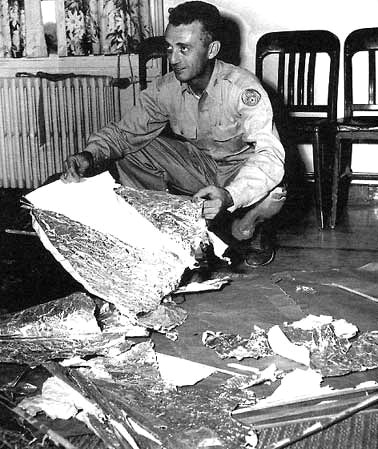 The 1947 incident, now famously called “The Roswell Incident,” really did include materials from a crashed alien spacecraft, according to a death-bed confession from the first government official on the scene of that now infamous New Mexico ranch.

After U.S. Army intelligence officer Jesse Marcel died he left his confession for all to read and charged his physician son, Jesse Marcel, Jr. – who was an 11-year old boy at the time of the event, to make his side of the story public after Marcel Sr.’s death.

Marcel’s confession reveals that the material he gathered up from the crash site did not include anything of Earthly origin, nor was it material from a man-made weather balloon. One of Marcel’s specialties was radar tracking of such devices and his top secret clearance would have made him aware of any such projects going on in the area. No such “spy” balloon operation was taking place at the time.

Marcel, who allowed his family to see some of the material before taking it into the base, was amazed at the kind of stuff he was holding in his hands, and knew it wasn’t anything any government on Earth was capable of producing at the time. He claims that, under orders, he was told to never speak of this as anything other than a weather balloon as long as he was alive. Being a proper soldier he obeyed those orders up to the time of this death, but left his version of the story for his son to make known. Marcel Sr. also warned his family to never speak of it until after his death. They all listened to him and have remained silent until now. Once again obeying his father’s wishes Marcel Jr. is now making the story known now that Sr. is dead.

Concerning the famous picture shown above, the image does show Marcel with real weather balloon material. He claims in his confession that the actual material retrieved from the crash site was long gone by that time to another location and he was ordered to pose with this well known material.

As far as there being dead or alive aliens on board, Marcel Sr. could not confirm or deny their existence as he was only involved with the collection of the material from the initial debris field, which was spread out over several hundreds of yards. There was a second reported crash site that evening but Marcel was not a part of that operation.

This month marks the 60th Anniversary of The Roswell Incident and in keeping with his father’s wishes, Marcel Jr. has released his dad’s death-bed confession in a new book titled “The Roswell Legacy,” highlighting the details of that fateful night in New Mexico.