Warning: This review will spoil the entire third season of The Walking Dead.  If you haven’t seen it and don’t want to know what happens, please stop reading now…. 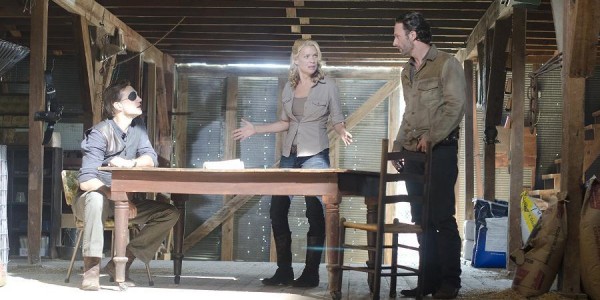 For the most popular, scripted series on television, you’d think The Walking Dead would be a lot better than it is.  Or maybe I should say you’d think the series could be more consistent.   A solid stretch of episodes to start season three were ultimately let down by the back half of the season.

It’s hard to recall that in the fall, The Walking Dead did some solid work. Establishing the Ricktatorship and introducing Woodbury and the Governor all worked well.  The show may have issues with characters (such as making them consistent) but it tried (and for the most part succeeded) in covering that up with unexpected deaths and an overriding sense of dread and tension as the two groups (the prison and Woodbury) headed toward their inevitable clash.

And then the second half of the season happened and things slowed down a bit. The big complaint lobbied at the show last year was that once we got to the Farm, things slowed down a lot. That complaint can also be leveled at the second half of season three that spend way too much time treading water as we waited for the inevitable clash between Rick and the Governor. A clash, I might add, that felt pretty anti-climatic once we got to it.

In the first half of the season, we got to see the Governor as a different side of what Rick could become.  In the second half of the season, we got to see him go bats**t crazy over the death of his daughter and the loss of his eye. And yet somehow we’re supposed to believe that he’s enigmatic enough a leader that no one in Woodbury – not even Andrea or Milton, who are closest to him – see through what he’s doing or even challenge him on it? Yes, we got the scene where Andrea contemplates killing him in his sleep, but she fails to follow through with it. It didn’t make much sense then and it really didn’t make much sense after Sunday’s episode where Andrea reveals that she was trying to make sure that no one died in the war of wills between Woodbury and the prison.

The problem with that is that it forces the character to look deliberately obtuse and as if she’s burying her head in the sand or putting her fingers in her ears and singing, “La, la, la, I can’t hear you” for much of the season. Instead of being a consistent character, Andrea became little more than a plot device in the season (especially the second half) and it led to a lot of frustration with her. In fact, I will have to admit that once we got to the big reveal that zombie Milton had managed to bite Andrea and that she was no longer going to be on the show, I admit I was a bit relieved. At least we don’t have to see any more terrible character work from her. (I’ll admit I think Lori Holden did the best with what she was given… she just didn’t have a lot to work with).

It also didn’t help that the other arc of the season – the Ricktatorship – also stumbled down the stretch. The first half of the season with Rick becoming overwhelmed by events happening around him really worked and gave Andrew Lincoln a lot to do. But once we get past the initial raid on Woodbury, things were fumbled a bit. The big meeting between Rick and the Governor should have been better than it was. (It’s interesting that the most compelling scenes were not those of Lincoln and David Morrisey, but instead of the other supporting characters, each realizing that they beyond the ideological differences of their respective leaders, they really do have a lot of common ground). The second half of the season saw Rick attempting to give up the role of absolute leader but still making decisions and informing people of them. For example, telling them he was going to make this a democracy and then walking away before anyone could discuss it. Or the decision to bring the Woodbury people to the prison.

The season finale was so centered on the Milton turns into a zombie and the Governor finally loses his mind that it failed to give me the scenes I wanted or needed. For example, why did the group decide to live at the prison after it’s just had some of its defensive positions take out by the Governor? Woodbury has electricity and seemed fairly safe, so why not take it over. There also needed to be a scene of Rick and Tyreese that gives us a better understanding of why Tyreese would come back to the prison after Rick threw them all out earlier this year. (I’m guessing saying that you’re sorry you went crazy cause you were seeing visions of your dead wife wouldn’t build up much confidence).

And then there’s Carl. The poor kid has to kill his mother and have Rick going crazy all season as his father. Now it appears Carl has lost his way and his becoming a mini version of the Governor. Rick looks like he has a huge problem child on his hands. Of course, a lot of this would be more believable if a few weeks ago Carl wasn’t hesitating to kill someone and then in the season finale is killing a young man from Woodbury who is trying to surrender.

Again, the show seems more interesting in driving forward its latest plotline than it is in developing the characters in an interesting, meaningful way.

Does it mean I’ll stop watching The Walking Dead? No.

Does it mean that the show has dropped from a watch first when new episodes show up on the DVR? Yes.

I’m curious to see if the new producer can do what no one else has done — give us a consistently great season of the show.  Until then, the show will be a good one, not a great one.