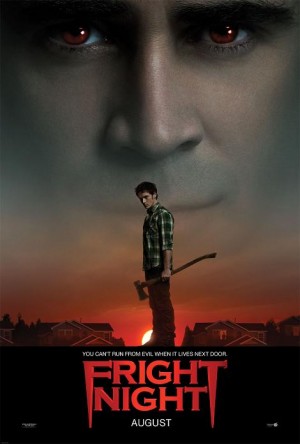 The remake of Fright Night hits theaters this weekend.  Starring Colin Farrell and David Tennant, the film has been generating some solid buzz and already has the studio confident enough to put a sequel into pre-production.

The Hollywood Reporter has weighed in with their review.

The second release in two weeks (after Glee: The 3D Concert Movie) to do next to nothing with its 3D format, Fright Night is nonetheless a moderately amusing remake of the well-liked 1985 original about a teenager who discovers a vampire has moved in next door. A steady supply of spiky humor and a game cast keep this cooking most of the way, though the pacing could have been tighter and the film seems as if it’s about to end two or three times before it actually does. The Disney release from DreamWorks looks to scare up some tasty box office through the waning days of summer.

You can read the full review HERE.