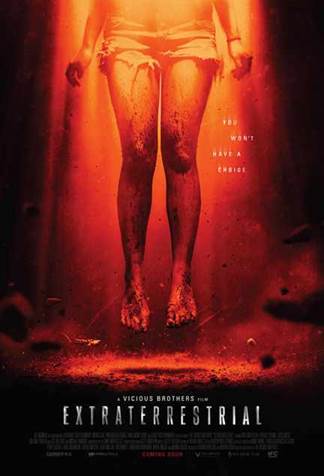 The Vicious Brothers (Grave Encounters) are back to scare the bejesus out of everyone with their new film titled Extraterrestrial.

Still reeling from her parent’s divorce, April (Emmy winner Brittany Allen) is dragged back to the vacation cabin where she spent fond summers as a child. She is accompanied by a group of friends, however, her trip down memory lane takes a dramatic and terrifying turn when a fireball descends from the sky and explodes in the nearby woods. The group, led by April’s boyfriend, venture out toward the explosion only to find what appears to be the remnants of a ship from another planet along with footprints that suggests its alien occupants are still alive. The college friends soon find themselves caught in the middle of something bigger and more terrifying than anything they could ever imagine.

Extraterrestrial is available on VOD and will make its theatrical debut on November 21, 2014.