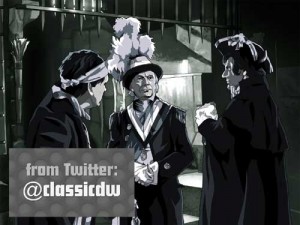 With the end of the line in sight for the classic Doctor Who range on DVD, many fans have been left wondering which model the BBC will follow to release several of the incomplete serials from the William Hartnell and Patrick Troughton years.

On VHS, stories that were missing an episode or two like “The Invasion,” “The Reign of Terror” and “The Ice Warriors” were released onto tape with linking footage filling in the gaps of the missing episodes and in some cases, including a CD of the audio from the missing installments.

For DVD, “The Invasion” hit shelves a few years ago with a revolutionary new system that took the original tv soundtrack and created new animated versions of the two missing installments from the stories.  Fans loved the episodes, but didn’t purchase them in high enough numbers to convince the BBC that doing the same for other stories would be a good investment right away.

Now comes news that William Hartnell’s “The Reign of Terror” will follow in the footsteps of “The Invasion” and get its missing episodes restored.  News about the animated segments (the serial is missing two episodes) broke via Twitter earlier this week, along with a picture showing a sample of what we’ll see when the animated version of episodes 4 and 5 hit DVD in 2012.

2|Entertain has commissioned Theta-Sigma/Thetamation and Big Finish Studios to take the existing audio (lovingly saved from the broadcasts on tape recorders by fansall these years!) and restore/remaster it, and marry it up to new animation that will re-create the scenes of the live-action broadcast.

Mark Ayres from the Doctor Who restoration team will be involved with the project, which is set to hit DVD shelves in 2012.