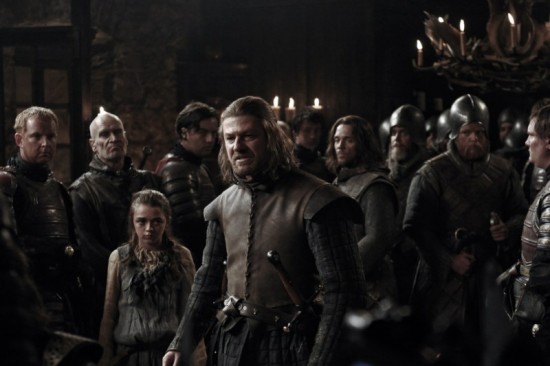 Let’s start at the beginning–how cool are the opening credits for Game of Thrones? In a day and age when credits and theme songs are being cut to make room for more commercials, it’s nice to know that at least on HBO we can have an opening title sequence that not only features a well done theme song, but also offers some clues to what’s coming up in the episode.  No, it’s not snippets of what’s to come in the hour as we saw with Battlestar Galactica. Instead, it’s the map of Westeros showing us where much of the dramatic action will center that week.

This week, the story is split between the Wall, King’s Landing, Winterfell and the land to the East.   If last week’s story was about getting us to dive into this world, this week’s was about getting our bearings a bit and building up many of the characters we met last week.

Watching the story unfold, it’s hard to not read too much into certain things, especially in light of having read the first two novels in this series.   I think a lot of this is my adding shades of meaning and foreshadowing to certain lines and moments simply based on my knowledge of what’s to come for certain characters and how their fates will play out (if the series remains as faithful to the books as these first two episodes have).  It leads me to believe that Thrones could be one of those series that is rewarding to watch multiple times in order to pick up clues and hints once the audience has an idea of the bigger tapestry at work.

As Eddard reluctantly leaves Winterfell to assume his role as the King’s Hand, Catelyn remains behind to care for Bran, who is unconscious after being shoved out of the tower last week by Jamie Lannister.   Bran saw Jamie and his twin sister, who is also the queen, Cersei in a compromising position.  One early scene finds the two discussing his fate and saying how it would be more merciful if Bran were to die instead of being crippled for life.  As I said before, this is one of those scenes that takes on more meaning for the audience than some characters involved.  Seeing Cersei go to Catelyn to offer comfort, the audience has to wonder if Cersei hasn’t gone to try and end Bran’s life or to determine how such a thing should be done.  It doesn’t help that an assassin shows up later to do just that, only stopped by Catelyn and Bran’s direwolf.

It’s interesting that one direwolf should save the family only to see that one has to be put down by the family as the episode concludes.   Arrya is giving a sword by Jon Snow and is training with the butcher’s boy.  Joffrey comes across them and challenges the boy to duel.  The scene shows the cruelty and arrogance of Joffrey, as well as his sense of entitlement.  His arrogance catches up with him when Arrya defends her friend and her direwolf becomes involved.  Joffrey is humiliated and Arrya flings his sword into the river.  Joff covers it up to his mother and the king and Sansa doesn’t help things.  It’s clear to see that Sansa is torn in her loyalties here, but she ends up siding with Joffrey and losing her direwolf in the bargain.  (And having just finished up Clash of Kings over the weekend, this scene took on even greater nuances if you know where the Sansa/Joffrey storyline is headed).

At the center of this is Ned, trying to come to terms with his new role as the King’s Hand and his love for his family.   Ned and Robert sitting under the trees discussing their conquests and days at war was one of the highlight as the episode, as was the warning that war is coming.   Ned quickly dismisses the threat of the Targaryens and the Dothraki alliance, saying that the alliance doesn’t have the ships to make it to King’s Landing much less begin to overthrow Robert.  As the episode unfolds, you begin to get the feeling that Robert may have been the wrong man for the job as king.

Meanwhile, across the sea, Daenerys is coming to terms with what marriage to Drago really means.  Watching her ask her maid for help in learning how to please Drago and not be taken so brutally was nicely done.  Again, I think Emlia Clarke is one of the great assets the series has and she shows it here.

And all that doesn’t even begin to get into getting our first real glimpse of the Wall.  And it looks as spectacular as we all hoped it would.

The second week of the show may be even stronger than the first.  While we’re still getting a good deal of exposition, there’s still enough rewards here to keep things interesting.  I was amazed at how quickly the hour went by watching the latest installment.

It’s hard to say which I enjoyed more–this episode or the return of Doctor Who. Both were solid and each can make their claim as one of the best things I saw last week.

Once again, I open it up to your comments. But don’t forget the guidelines. SPOILERS for this episode and last week are OK, but SPOILERS for future developments from the books are not.