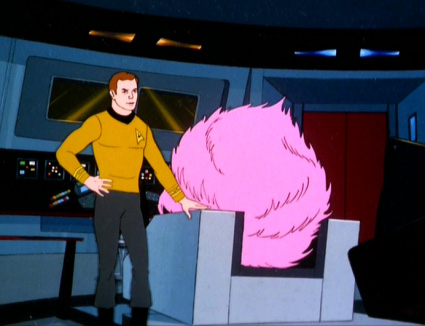 After the success of “The Trouble with Tribbles” in the second season of classic Star Trek, it’d seem like a no-brainer to include a sequel episode with the furry creatures for the third season of the show, wouldn’t it?    But a third-season follow-up never materialized, though one was initially planned says “Tribbles” writer David Gerrold.

Talking to Trek Today, Gerrold says that it was in-coming producer Fred Freiberger who nixed a second “Tribbles” episode.

“Freddy’s first words to me were, ‘I screened the Tribbles episode this morning. I didn’t like it. Star Trek is not a comedy,’” said Gerrold. “I went, ‘Oh, all right. Well, then I’ll do something else.’ So he killed the second Tribble episode for the third season.”

Freiberger also killed another script Gerrold had in development for the third season, leading to Gerrold coming up with the outline for what eventually became “The Cloud Minders.”

The proposed “Tribbles” sequel and Gerrold’s other script, “BEM” eventually went on to become part of the animated Trek from the 1970s.  And while some fans may argue whether or not the animated adventures of the classic crew are canon or not, one significant piece of canon was introduced on that show–it gave us the middle name for Captain James T. Kirk.

“I’ll tell you how that happened,” said Gerrold. “I got the name from a book I’d read about the history of torture. So, Dorothy and I were at a Star Trek convention in 1973 and somebody asked ‘What does the T in James T. Kirk stand for?’ And without really thinking, I said ‘Tiberius.’ It got a big laugh and it became a running gag. Then, when I was writing that episode I decided to put it in. Dorothy ran it by Gene Roddenberry, and he said, ‘Sure, let’s go ahead.’ Then I recapped it in a Star Trek novel I wrote a year or so later, and I showed where the name Tiberius came from.”