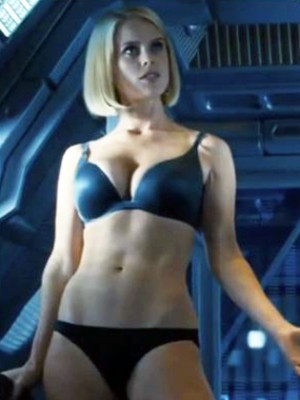 If you’ve seen the trailers for Star Trek into Darkness, you know that actress Alice Eve strips down to her skivvies during the movie.

Turns out the entire scene with Carol Marcus in her underwear was gratuitous, and one that writer Damon Lindelof doesn’t see the need for in retrospect.

“Why is Alice Eve in her underwear, gratuitously and unnecessarily, without any real effort made as to why in God’s name she would undress in that circumstance? Well there’s a very good answer for that. But I’m not telling you what it is. Because… uh… MYSTERY?” Lindelof tells Comic Book Movie.

Lindelof went on to add that there was a scene in which Benedict Cumberbatch was shirtless as John Harrison but that scene never made it into the final script.

“As for the shirtless scene… we scripted it, but I don’t think it ever got shot. You know why? Because getting actors to take their clothes off is DEMEANING AND HORRIBLE AND…” he says. “Oh. Right. Sorry.”

So, do you think the scene was too much or just a ploy to sell tickets to audience members?

And does Lindelof owe us an apology or are some of us just overreacting?