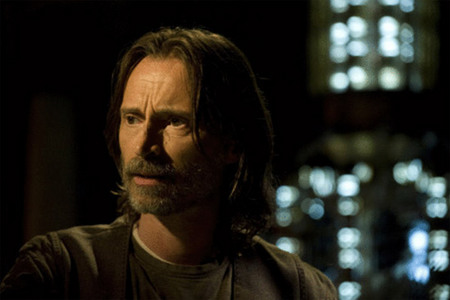 Last week, SGU producer Brad Wright promised that the upcoming run of Stargate Universe episodes would kick the series into another gear. That’s a big promise from a series currently delivering solid episodes week after week in its second season.

The good news is that Wright is as good as his word. Based on the episodes provided for preview by SyFy, fans of SGU are going to be very, very happy with the results the next two weeks.

With “The Greater Good,” Destiny comes across a similar ship, floating dead in space. Rush and Young head over in spacesuits to investigate the ship, becoming trapped there when things go awry on Destiny. Desperate to keep his real agenda a secret, Rush calls for Amanda Perry (last seen in season one’s “Sabotage”) to come on board to help decipher Destiny’s systems and, more importantly, to help keep his own secrets (such as knowing the location of the bridge) under wraps. Perry uses the stones and switches places with Lucian Alliance member Ginn, who had a significant storyline last week.

Things soon spiral out of control on both fronts and the tension reaches new levels. Rush’s attempts to cover up what he’s really up to on board the ship soon spiral out of control and by the end of the hour, a lot of things have changed on the ship. As promised, we find out more about Destiny’s true mission and how that may tie into our group of refugee’s goal of trying to get back to our galaxy.

As each thread comes to a head, SGU keeps upping the ante and then delivering on it again and again. “Good” brings into play Rush’s duplicity this year, Young’s continuing deterioration as the commander of the ship and aspects of the Lucian Alliance being on board the ship. As always, there are intended and unintended consequences to everything, all adding up to a moment at the episode’s end that will leave you wanting to see the next episode, “Malice” as soon as humanly possibly.

In “Malice” Simeon, played by Robert Knepper, escapes custody and goes on a rampage across the ship. He eventually dials out to a nearby planet with Rush in hot pursuit. The crew is forced to go after him because Simeon has details on the upcoming Lucian Alliance attack on Earth. With a ticking time clock before the ship can jump as well as knowledge of the new mission and the fact that Simeon needs to be brought back alive, the episode in a hour filled with some superb location work and a lot of tension. Knepper delivers a solid performance, bringing menace to the role of Simeon and Robert Carlyle continues to turn in some astounding work as Rush.

While not as pivotal to the overall storyline of SGU as “Good,” “Malice” still works well and there are some events that occur late in the story that are clearly setting the groundwork for the rest of season two (and hopefully beyond).

Both episodes are strong examples of how and why SGU is working so well this year. Everyone involved is at the top of the their game and fans of the franchise and this series should be very, very happy tuning in the next two Tuesdays.

My only problem is that now that I’ve seen both episodes, I have to wait three weeks to see where it all goes next.