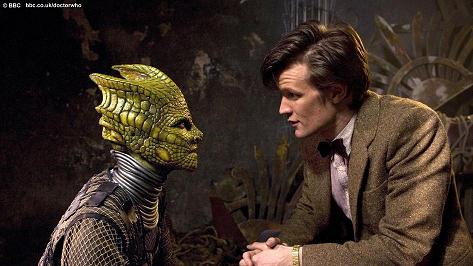 Ever since “Doctor Who” returned to our screens, we’ve had rumors (lots of them) about which classic series monsters or villains might be up for a return appearance.  With each coming season, we’ve heard rumors of Ice Warriors, Zygons, Sea Devils and Silurians possibly making a return.

Each of these classic series monsters were feature in a limited but memorable story or stories during the classic era and the thought of seeing bigger budget, updated versions of them is something that sent a little palpitation of joy through this “Doctor Who” fan’s heart.   At the top of the list was the Silurians, who featured in the second story of the Jon Pertwee era and were one of the more intriguing “men in rubber” suit monsters from the era.  Not only were the visually (for the time) well done, but their backstory as the original inhabitants of our planet who simply wanted to take back what they perceived as theirs was one of the more intriguing twists on the classic alien invasion story.

So, when I heard the confirmation that, at last, the Silurians were returning for series five, I have to admit I was pretty intrigued.  (The only thing more intriguing was seeing Matt Smith as the new Doctor).  Yes, even more than the Weeping Angels returning.

We’ve waited five years for the return of the Silurians and “The Hungry Earth” finally saw it.  But was it worth it?

As has become a hallmark of the Moffat/Smith era, “Earth” was able to ratchet up the tension of the classic “base under siege”  storyline from many of the classic series best stories.  Arriving ten years in the future, the Doctor, Amy and Rory discover a drilling project has just broken through 21 kilometers below the Earth’s crust and some mysterious things are happening. Bodies are disappearing from graves, people are being pulled into the Earth and a mysterious sound is coming from beneath the ground.   As the Doctor begins to look into things, Amy is pulled into the Earth and the area sealed off by a dome-like forcefield.  And that’s just the beginning as something seems to be burrowing up to the surface and will soon arrive.

In many ways, “The Hungry Earth” is a modern spin on the classic early episodes of “Doctor Who and the Silurians” complete with monster view shots, keeping the Siluarians hidden in shadows until the big reveal and the Doctor knowing there’s something more going on here.  There’s also a bit of an echo of another story from the era, “Inferno” where a drilling project has unintended consequences.  Even the big reveal for the cliffhanger (which bless you Steven Moffat for proving that we can have a cliffhanger that doesn’t involve the Doctor and/or the companion in immediate danger) is an echo of the Pertwee era story.

But there’s also a modern sensibility to the first half of the adventure.  The Doctor’s connection with the little boy, saying that he’s the thing monsters are afraid of is a nice touch, as is the Doctor’s own delight at realizing he knows what he’s up against.   Hearing the Doctor say that weapons are unnecessary is a nice touch (if you’ve seen the original, you’ll know why) as well as is his conversation with a captured Silurians.   And once again, it seem as if Rory’s being proven correct that being associated with the Doctor is dangerous.  Amy’s been pulled under the surface and is being held by the Silurian doctors for some kind of experimentation.

The story also does well by not radically altering the Silurians for the new era.   The story doesn’t feel like it needs to necessarily reinvent the creatures from under the Earth like it did with the Cybermen.  Instead, it keeps the rich background the original created (and was sadly neglected when we got to “Warriors of the Deep”) and uses it to good effect.   Again, the conversation with the Doctor and the Silurian prisoner is nicely done, reflecting not only the Siliurian view that our planet is theirs under right of first claim but also seeing the Doctor’s guilt at what happened to the original set he met in the Pertwee era story.   Moffat wisely makes the scene work on several levels–not only as a dramatic piece but also one that classic series fans will find extra nuances to while not losing the newer fans.

Once again, the pacing is solid, the direction is good and the acting works well all around.  The new Silurians are well realized and echo just enough of the original design to be recognizable.   And again, while the cliffhanger isn’t an immediate danger situation, it leaves me intrigued to find out where the story will go next.

In short, for now, this one lived up to my expectations.   I only hope part two can do the same, if not exceed them.

And if you have not seen “Doctor Who and the Silurians” or “Inferno,” both are available on DVD.