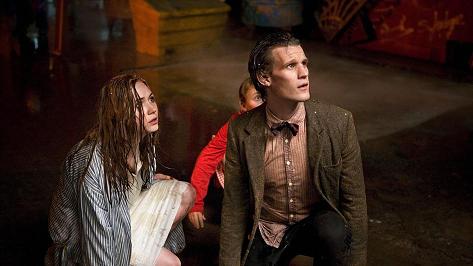 Last week, Matt Smith and Steven Moffat hit the ground running to kick off their era of “Doctor Who.” This week, things slow down a bit to a bit more of a leisurely stroll, allowing this new era to breath a bit.

After getting a new Doctor, a new companion and a new TARDIS interior last week, it was nice to see the series take 40-minutes to catch its breath with a straight-forward story. We also get to see Karen Gillian and Matt Smith really stepping into and inhabiting their new roles, expanding on the glimpses of what we saw last week in “The Eleventh Hour.”

For her first trip in the TARDIS, the Doctor takes Amy forward in time 1300 years. The Earth has long since been destroyed by solar flares and the British Empire is now traveling through space as Starship UK. The Doctor decides to take Amy to explore the world and soon discovers that the empire hides a secret, not only from the Doctor but from its citizens. On their sixteenth birthday and then every five years after that, citizens are informed of the truth about their empire and allowed to either vote to protest or have the knowledge wiped from their minds. At one point, Amy undergoes the procedure and is then given a warning from herself not to let the Doctor explore or find out too much about what’s going on.

In many ways, “The Beast Below” has the feel of a classic era “Doctor Who” story combined with a greatest hits of Moffat’s previous stories. We have hidden warnings ala “Blink” and menacing threat along the lines of the Clockwork Men in “Girl in the Fireplace” or the gas mask children from “The Empty Child” and “The Doctor Dances.”

And while the story itself is straight-forward enough, the real meat hangs on watching Smith and Gillian in their respective roles. Smith settles into his role as the Doctor, losing a bit of the manic edge he had last week and becoming a far more enigmatic character. At times, Smith seems to be channeling the spirit of Patrick Troughton’s take on the Doctor. There’s a childish wonder shown when the TARDIS first arrives on Starship UK that later turns into dark anger when the Doctor discovers the true secret of what’s going on and the implications of Amy’s decision to wipe the knowledge from her mind and to leave messages to encourage her to make the Doctor leave.

The story allows enough time for both Smith and Gillian to have a showcase moment or two, which after a year or so of specials and huge, series-changing, overstuffed epic stories, a nice quieter, more traditional “Doctor Who” story is a welcome change of pace.

However, I do have some minor quibbles with the ending, namely that the solution to the problem doesn’t come from the Doctor himself but from Amy. The solution works, but I still find the new series to have a bit too much over-reliance on the companion to provide the solution that the Doctor could or should come up with himself. If anything, having the Doctor be as single-minded in seeing only one worst-case solution to the problem at hand feels like the story wants to justify keeping Amy around after the Doctor threatens to take her home and leave her behind once this adventure has concluded.

After seeing the Doctor use his wits and intelligence to defeat the problem last week, this week’s ending stands out like a bit of a sore thumb.

Thankfully, Moffat doesn’t end the story there, but casts long-time “Who” fans back to the early days of the show when each story dovetailed into one another. The final few minutes tease next week’s installment and will likely have most fans buzzing on what’s to come next week.