Slice of SciFi Rating: 2 out of 5 stars

Purchase a copy of “Star Trek: Inception.” thru Amazon 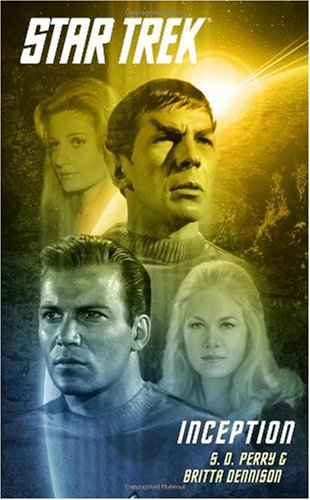 “Star Trek” novels (and media tie-in novels in general) walk a very fine line when it comes to revisiting familiar elements from their original source material.    This can especially be true when it comes to giving the details behind the romantic liaisons of various character that took place off screen but are referenced and alluded to on-screen in various episodes or movies.

To most “Trek” readers, Peter David’s “Imzadi” is held up as the gold standard for filling in the details of a previous romance–in this case, giving us the history of Riker and Troi before they met again on the bridge of the starship Enterprise.

Then there’s the latest entry in the “Trek” fiction line, “Inception” that wants to give us a bit of insight into the romance between Captain James T. Kirk and Carol Marcus as well as that of Spock and Leila Calomi before the original series begin.  A novel that concentrated on one or the other might have worked better, but the usually reliable S.D. Perry and new writer Britta Dennison instead bring both romantic pairings together in such a way that strains the willing suspension of disbelief and, as a whole, drags down the story.

It also doesn’t help that most fans know how these things will end and the authors don’t offer any new insight or character nuances to help keep the story moving along.

Coming off a bad break-up, Leila joins Carol Marcus’ scientific team that is looking to use a revolutionary and controversial element to help terraform part of Mars.   A group of protesters seeks to stand in the way of the development, leading to a lot of passages that get bogged down in a debate over the merit of scientific progress and how it’s achieved with Kirk offering the Starfleet party line and the group’s leader opposing him.  The story does try to offer a motivation for the leader, but since he’s a relative new comer to the “Trek” universe it’s hard to really emphasize as much with him as we might or the authors want us to.

Into all this, we discover that Carol and Kirk are in the midst of their romance and that Leila meets Spock and falls hopelessly in love with him.

What could have been a fascinating exploration of two influential women in the lives of two of the most popular characters in the “Trek” canon instead is nothing more than a lot of relationship angst for pages on end.  Carol worries about how to tell Kirk her big news and how he’ll react while Leila pines for the emotionally unavailable Spock.

In many ways, the concept behind “Inception” is an interesting one, but as I read the novel I kept thinking it might have worked better as a short story. Weight in at just over 300 pages, the novel is fairly lightweight both in page count and in storyline.  The story is a fascinating experiment but one that, unfortunately, comes up short.