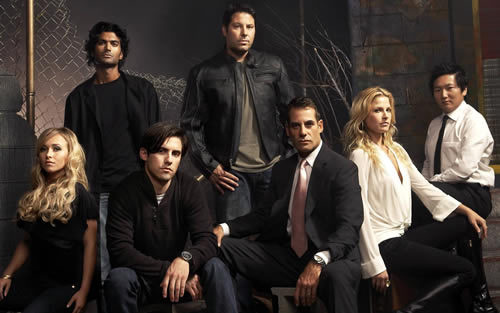 Of course, if the ratings are any indication, not many viewers took notice.   If you’re curious about the ratings of the show, tune in for an interesting segment on this week’s Slice of SciFi. (You can hear the live feed tonight or catch the episode starting Saturday)

Web site io9 has seen the episodes and come up with three things that could be done to help save the struggling series and, perhaps, breath some new life and enthusiasm into the show. They are:

STEP ONE: Kill the following three characters
Hiro Nakamura. It’s clear the writers don’t know what to do with him, given last week’s geek-babble la-di-da. Be done with him. It’ll also cut down on the temporal storytelling — time travel is to Heroes what the holodeck was to Star Trek: The Next Generation: a dramatic crutch that long outlived its usefulness. The death of Hiro will also let you tell some interesting stories with Ando, the sidekick who’s gotta step up into the big leagues. Or to never have us travel to Japan ever again. Or read anymore subtitles.

Sylar. He should’ve died at the end of the first season. But Sylar’s, and Zachary Quinto’s, popularity saw to it that he endured, and so we’ve had to endure him. But he doesn’t want anything — and a villain without a plan is just a child behaving badly. Besides, the fact that all of the “heroes” combined haven’t been able to kill him in four years renders said heroes woefully inadequate. The show needs a new Big Bad, and badly…we’ll get to that later.

Noah Bennett. He’s a hunter who no longer hunts. He mopes and goes on dates. As such, should be put out to pasture. What dramatic purpose does he serve? He can do more for us in death that he could in life, and that’s…

STEP TWO: Make Claire Bennett the villain
With her father gone, she’s sent into a spiral of hate and despair and pain. Maybe she comes to the conclusion that the world is a better place, for everyone, if there were no abilities — and no one with abilities. Or, perhaps, she decides the only way to be “normal” is to make everyoe “abnormal.” Or come up with something better. That’s what you’re paid for. But an invulnerable girl who’s got personal ties to all the heroes, knows what makes them all tick, and has access to her father’s files and contacts? She’d make a formidable villain. And surprising.

STEP THREE: Cancel it.
Set an expiration date. That’s what rescued Lost from it’s third season aimlessness: deciding when it would all come to a close. Heroes hasn’t been building towards anything, and so every perambulation of the story has just been gear-spinning folly. Sound and fury signifying an hour I couldn’t spent revisiting the joys of ham radio. Focus, and give us the big, honking superhero fight we’ve been waiting for. Go out with a bang, rather than simply limp into inconsequence.

So, do you think these three things could help save the show? Or have you tuned out by now and just don’t care anymore?