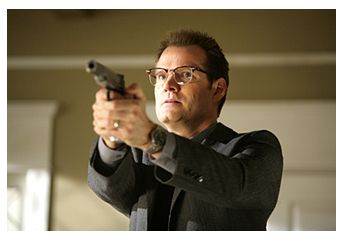 Jack Coleman has played many roles over his thirty-three year career as an actor. He has starred in everything from daytime and night soap operas (Days of Our Lives, Dynasty, Scandal), serials (Kingdom Hospital, Oh Baby), comedy (The Office), crime thrillers (Castle, Burn Notice), and sci-fi (Ultimate Spider-Man, The Vampire Diaries).

Yet if you ask most TV viewers which show they know him from nine out of ten will say, “he’s the horned-rimmed glasses guy from Heroes,” famously panned as HRG.

Jack will be coming back to his most recognized character for the NBC limited 13-episode series return of Heroes: Reborn set for airing on the Peacock Channel beginning February 2015. He will also be showing up in a short online digital pre-release before the 2015 debut.

Coleman is the first of the series regulars to sign for a return of his character Noah Bennet, adopted-father of Claire (Bear) Bennet, the girl who cannot die.

Heroes was an immediate smash hit for NBC when it first aired in 2006 because of its unique character premise but it lost a major part of its viewing audience by its second season when the show got bogged down with the weight of its own convoluted plot twists and avalanche of multiple character stories, however it managed to limp along for four seasons before being canceled in 2010.

Heroes producer, Tim Kring will return as the minis’ producer and promises fans that the 13-episode arc will be reminiscent of that first successful season.

Nearly every main actor from the original series has been approached to give at least a brief cameo appearance for this limited edition series, according to Deadline.com. The full final cast is yet to be signed.