A dark, scary and troubling “Doctor Who” story 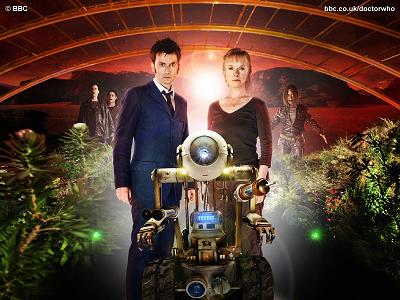 In the final moments of the latest “Doctor Who” special, the production team dedicates the special to the memory of long-time and recently deceased producer Barry Letts.   The dedication is an appropriate one because it not only honors the memory of Letts for fans, but because virtually every second of “The Waters of Mars” leading up to the fade to black is chock full of moments and elements that the late producer would have approved of.

“The Waters of Mars” is a dark, scary and troubling “Doctor Who” story–not only for the frightening way it takes something as everyday and “safe” as water and makes it scary, but also in the implications of several decisions the Doctor makes during the course of the hour and their potential implications to the character and the series.

The story finds the Doctor arriving on the planet of Mars in the near future and heading out of the TARDIS for a stroll.  He’s captured by a robot and made to go down into the scientific colony established on the surface of the red planet.  The Doctor discovers that he’s arrived on the day the colony is destroyed and that the events is one that is fixed in history.  It must happen to push humans out beyond our solar system and there’s nothing the Doctor can do to save anyone there.  Or is there?

As the Doctor keeps trying to talk himself into leaving, a mysterious virus in the water turns up.  The virus transforms the human beings there into creatures with cracked lips and who spout water from their hairline, arms and legs.   The crew makes plans to leave, but they can’t carry back a single drop of the infected water with them for fear of unleashing the virus on Earth.

The dueling conflicts of the virus and the Doctor’s knowing he can’t interfere drive the story along at a good clip.   Writers Russell T. Davies and Phil Ford keep the revelations coming at a good clip and don’t fall victim to lags that have hampered many of the Christmas specials from the new series.

Classic “Who” fans will pick up on the deliberate homage to the Patrick Troughton era with this base under siege story and lots of shout-outs to the program’s long history.  Newer fans will be able to enjoy the superlative viasual work by director Graeme Harper, who always seems to find ways to make old and new “Who” a visual treat.

And while the first 45 or so minutes are entertaining enough, it’s in the final 15 minutes that the story really kicks it into a different gear.   The story feels like a culmination of an era with several threads from Tennant’s run as the Doctor coming to a head (to say more would be to SPOIL things for those who haven’t seen it) and some fascinating implications for the series and the Doctor.   These moments walk a fine line of pure hope and utter dread as we see the Doctor walk a very dark, manipulative line that previous stories and incarnations have hinted at, but never quite gone this far.

In his penultimate story on “Doctor Who,” Tennant takes his performance to a new level.  In the BBC provided commentary, Davies says he wanted to challenge Tennant to take his game to a new level in his final installments and the actor suitably responds in “Waters.”

And there is one good thing about American fans being forced to wait a month to see the story on BBC America–we’ll only have to wait a week for part one of “The End of Time. ”

“The Waters of Mars” will leave you thirsty for more.