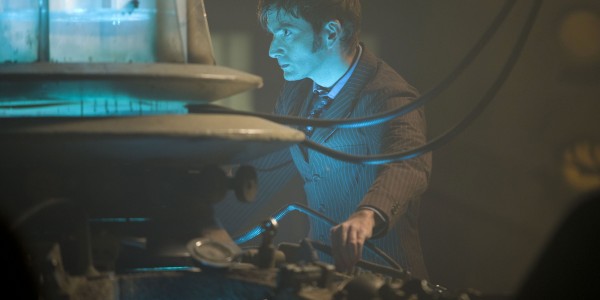 As we previously reported, fans across the world will be able to view the 50th Anniversary special of Doctor Who at the same time on November 23.

To gear up for the big anniversary, the BBC has released a couple of images from the upcoming special.  Written by Stephen Moffat, “The Day of the Doctor” sees the on-screen reunion of two Doctors (David Tennant and Matt Smith) as well as the big revelation of the identity of John Hurt’s character.   Joining the TARDIS crew will be Jenna Louise-Coleman and Billie Piper.  This will be the first time Tennant and Piper have appeared as the Doctor and Rose since they departed the show three years ago.

These images from the  BBC show Tennant back in the TARDIS as the Doctor. 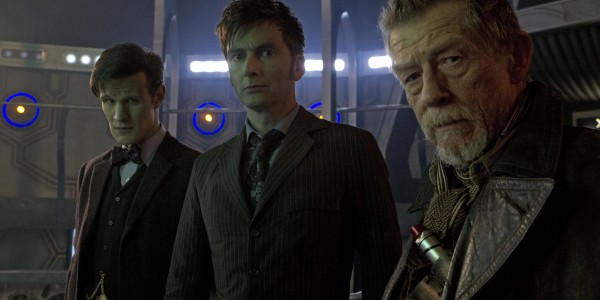 “The Day of the Doctor” is the centerpiece of a weeklong celebration of Doctor Who.  The BBC has announced a full day of programming across multiple platforms, celebrating the famous Time Lord’s anniversary.  One part of that includes Mark Gatiss’ tv movie, examining the origins of the program.

Matt Smith, who plays the Doctor, said: “The Day of the Doctor is nearly here! Hope you all enjoy. There’s lots more coming your way, as the countdown to the 50th begins now.”

Steven Moffat, lead writer and executive producer, Doctor Who said: ”50 years has turned Doctor Who from a television show into a cultural landmark. Personally I can’t wait to see what it becomes after a hundred.”

While a start time hasn’t been officially announced for the episodes yet, we should know details of when you can tune in soon. On top of the worldwide TV broadcast, BBC AMERICA will announce in the coming days details of select 3D screenings of the anniversary episode in theatres in the United States.

The special is also scheduled for DVD and Blu-Ray release in December of this year..

The excitement comes on the heels of big news last week that two previously missing Patrick Troughton era serials were returned to the BBC archives.