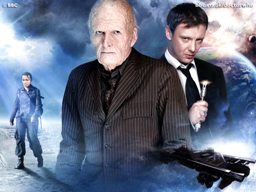 After five solid weeks of “Doctor Who” I suppose there was going to be an episode that was a let down eventually. It’s just too bad that episode turned out to be the season finale of series three, “Last of the Time Lords.”

Looking at the entire three-part season finale in the context of being a six-part story from the classic “Who” days, it’s easy to see some similiar patterns. One common criticism of six part stories is that in episode five, not a lot really happens to advance the plot. And looking at the first half of “Last of the Time Lords” you could make that same criticism here. Because for a solid 25 minutes of the storyline, not a whole lot happens.

The story begins, flashing forward a year and giving us hints of what Martha has been up to. She’s been travelling the globe, looking for a weapon that will kill the Master. It’s apparently some device that has four vials of fluid that when combined and injected into the Master will kill a Time Lord. The research for it came from old UNIT files and Torchwood. It’s an interesting idea, I suppose, but if there’s one thing UNIT should have learned, it’s that the Master is very careful of those he allows close to him. Seems to me this weapon isn’t the best way to take out a Time Lord, so when it turns out to be a red herring, I wasn’t terribly shocked.

Meanwhile, the Doctor, Jack and Martha’s entire family are being held prisoner on board the air ship from last week. The Doctor is still in his older state from last week and is brought out occasionally by the Master to gloat. The Master has decided to build up Earth’s war machine to serve as an attack force on the rest of the universe. He will declare war and usher in a new Gallifrey with the help of the Toclafane.

And then, the Doctor and everyone tries to take out the Master, only to see the plan fail. Honestly, I can’t see why it took a year for them to come up with this plan, unless it was part of the overall plan the Doctor had to defeat the Master. Though how it ties in, I’m still a bit sketchy on — maybe it will become clear as I watch this episode a few dozen more times in the years ahead. The Master uses his laser screwdriver to age the Doctor again, putting all of the Doctor’s years on him and turning off his ability to regenerate (this will be important later). The Doctor becomes a small, withered little character who is kept in a bird cage.

It’s at this point the pacing and story derail a bit. Nothing much of interest happens for a long stretch of the story, except the Master gloating and his wife looking more and more like an addict on a bad binge. Once again, my big issues with Russell T. Davies stories comes into play — he’s got some good ideas here, but he really doesn’t bother to explore them. I really am interested in why the Master’s wife looks so pale and withdrawn, but we never get any reasoning for it. Or why the Master married her or what purpose she serves in his master plan (no pun intended)? Does he want to father a new race of Time Lords with her? Could this being, who is half-human, somehow be used to tie into the TV movie? So many ideas, so many good ideas, so few of them explored.

At this point, as I’m beginning to become frustrated with my favorite show, things finally begin to happen. It’s almost as if the words “episode six” appeared on screen and now we have to race to the finish line to pay off all the storylines we have in place.

The final half of the story almost redeems the episode as whole. For one thing, as pay-offs to season-long story arcs come into play, it actually feels natural and not forced. Davies even goes so far as to give some payoffs to story arcs from the entire series, making the final half of the story feel like he’s saying farewell to the series and is stepping aside. And I will give the script credit — for the most part, I like the way all the pay-offs play out.

Davies script writing here is more assured and gives me hope for future installments. He reveals who the Toclafane really are and I have to admit, it worked. It ties in two dangling plot threads from part one and two in a satisfying manner. (The Toclafane are the human colonists from “Unity” and their ability to come back in time and conquer Earth is because of the TARDIS being a paradox machine from part two). Meanwhile, the Doctor is able to heal himself through the combined good will of the population of the Earth. He’s timed his resurrection to the launch of the weapons to start the war, thus defeating the Master completely and with no chance to rebuild or escape. If you thought the TV Movie was full of Christ-figure overtones for the good Doctor, it’s nothing compared to what we get here. The Doctor’s healing and reverting back to his old self is a nice moment (he ties into the Master’s satellite network and reverses it to help the good thoughts restore him, which explains why no one bothered to take it out) for the show.

Then, there is a final confronation between the Master and the Doctor. The Doctor decides he will hold the Master prisoner in the TARDIS and try to rehabilitate him. Well, that is until the wife shoots the Master and he refuses to re-generate. Apparently, Gallifreyans can hold back a re-generation and die if they want. It’s never been estabished by the continuity before, but then again it’s never been refuted by previous continuity.

And the Master dies in the Doctor’s arms and is burned on a funeral pyre. Or so we’re lead to believe. A female hand comes in at the end and steals his ring–so the Master could be back in the future. Possibly as Mrs. Saxon….(she’s probably cheaper to use on the show than John Simms).

For the most part, all of this works well and it enjoyable. It’s just too bad all this good material is overshadowed by the giant reset button ending. After closing the paradox machine, the world moves back a year and resets itself–but no one recalls it except those on the ship. I guess after all those years of reset button endings on “Star Trek” it kind of stinks to see it incorporated here. I am glad that at least Martha and her family remember it all, but it still felt like Davies painted himself into a corner and didn’t know how else to get out of the situation. (Also, we’ve seen so many one year jumps on shows of late, that it seems like the SF flavor of the moment.)

I wanted to love this episode. I desparately wanted to love it. But coming away from it, I have to admit I’m unsatisfied. It did some good things–maybe even some great things. But it also had some pacing issues and a deux ex machina ending that stuck out like sore thumbs. I think a lot of this is because of the writer that is Russell T. Davies. Davies seems to go for things that make for good television moments and work better in small clips (last year’s season finale trailer was better than the two-part season finale in my opinion) but yet as a cohesive whole, it never adds up. Which is exactly what seems to be happening here. I’d like to say this problem is more because of it being the end of the season and Davies is busy with all his duties as producer, but with the exeption of “Gridlock” this has been an issue in all of his scripts on the show.

Also, there are a lot of wasted opportunities. Looking back, John Barrowman is totally wasted on the three parts he’s in this year. He does very little this episode except be held prisoner. We do get a huge reveal of his nickname and Davies puts in that Jack can age but he won’t die, thus ensuring Jack can continue to be in Torchwood and look older (and thus not falling into the trap of shows like “Angel” with ageless characters played by actors who age). Let me say that I do like the reveal of Jack’s nickname and the implications for the series as a whole. I won’t reveal it here, but it’s a nice touch.

Also, while I don’t necessarily want extended scenes of her family such as we got with Rose, I feel as though we never got to know much about Martha’s family. We should care about them and their being held prisoner and forced to be slaves for the Master…but I don’t have any investment in the characters, beyond the fact they are familiar faces. Had it been Jackie and Micky held prisoner and forced to be virtual slaves to the Master, I would have cared far more if they lived or died in their attempt to overthrow him. I think this is a weakness of the season as a whole (one of the few).

And so, we come to the end of series three. I wanted it to end with a bang, but it sort of ended with more of a thud. Like I said, some good parts to the story, but some of the usual mistakes that a Russell T. Davies script makes. I wanted to love it more than I did. I liked it but I’m still not entirely satisfied.

That said, it wont’ ruin my overall positive feeling for the season and classifying it as the best season the new show has produced.