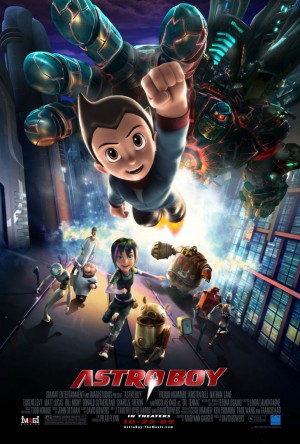 Few characters have made as powerful or as lasting an impression on international popular culture as Astro Boy. The little robot first appeared in 1951 as a character in the celebrated artist and animator Osamu Tezuka’s legendary manga (Japanese comic book) and became an instant icon. He was subsequently featured as the star of his own television series in both black-and-white and in color, eventually airing in over 40 countries. Astro Boy created the standard for a new form of animation that has become world famous as anime.

Now for the first time, Astro Boy will be brought to life on the big screen. Created with breathtaking computer animation from Imagi Studios, the film Astro Boy is a thrilling tale of a true hero. The film is set to debut in theaters on October 23, 2009.

Set in futuristic Metro City, Astro Boy is about a young robot with incredible powers created by a brilliant scientist named Dr. Tenma (Nicolas Cage). Powered by positive “blue” energy, Astro Boy (Freddie Highmore) is endowed with super strength, x-ray vision, unbelievable speed and the ability to fly. Embarking on a journey in search of acceptance, Astro Boy encounters many colorful characters and through his adventures, he learns the joys and emotions of being human, and gains the strength to embrace his destiny.

Ultimately learning his friends and family are in danger, Astro Boy marshals his awesome super powers and returns to Metro City in a valiant effort to save everything he cares about and to understand what it means to be a hero.