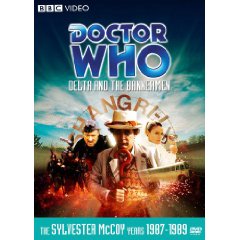 “Delta and the Bannermen” is still one of the most disappointing stories from the classic series run.

One of the good things about the release of classic “Doctor Who” on VHS and now DVD is that it gives fans the chance to revisit and reevaluate stories.  In some cases, stories bandied about as classics for years underwent a radical re-assessment while some forgotten gems went up in the estimiation of many.

“Delta and the Bannermen” is a story that was met with a great deal of derision when it first aired in 1987.  And in the intervening 22 years, there haven’t been a lot of reasons to revisit the story on a regular basis.  So, heading into the DVD of the story, I put aside my original notions of the story and tried to approach with a fresh attitude and an open mind.

Unfortunately, it didn’t help much.  “Delta and the Bannermen” is still one of the most disappointing stories from the classic series run.

The Doctor and Mel arrive at  a space toll both and win the prize for being the ten billionth customers to pass through.  The prize is a trip to DisneyLand in 1959 with a group of alien tourists.   Unknown to the Doctor and Mel, the alien female Delta has snuck aboard the bus, fleeing the ruthless (at least they’re supposed to be) Bannermen hoard led by Gavorock.  The Bannermen are bent upon wiping out Delta’s race just because they can.   While traveling to Earth, the bus hits an orbiting satellite and is forced to set down in Wales.

If it sounds a bit busy and unfocused, that’s because it is.  And we haven’t even got to the part where Delta hatches a new baby, who grows at a remarkable rate and is played by a different green tinted child actress is each scene.

“Delta and the Bannermen” is three episodes of unfocused storytelling, shallow characters and a lot of bad incidental music.   In fact, it may be the incidental music that is the most jarring thing about this story–it borrows heavily from classic rock and roll songs of the era.  But techno version of them just sound a bit jarring and a little too over the top.

Part of the problem comes from the fact that the audience is given no real reason to fear the Bannermen other than every single character outside of the Doctor collapses into a pile of jelly and trembles every time we hear their name.  Which would be a good thing if the Bannermen were actually somehow seen as threatening at any point in the story.   Their lead Gavorock manages to pull of a few vaguely sinister moments, but as the most feared group in the universe, the Bannermen come up woefully short.

But it’s not all about the story when it comes to “Doctor Who” on DVD.  A good set of extras can save a story or possibly put a relunctant classic series fan into the mood to buy it.   For the most part, the extras are far better than the three episodes offered here.   The centerpiece is an extended, rough cut of episode one. The sound effects and music are missing and it’s a bit rough in certain areas, but you get a better idea of what director Chris Clough was trying to achieve here from the Malcolm Kohll script.  It doesn’t make it a better story by any means and it might have been interesting to see some extended footage from the last two episodes as well.

The other highlight of the extras is the commentary, featuring actors Sylvester McCoy and Sara Griffins, who plays potential companion Ray, director Clough and script editor Andrew Cartmel.  McCoy serves as the rign leader, keeping the commentary moving and it does offer a few interesting nuggets about the making of the show.   The commentary, once again, proves that the most effective “Who” commentaries are a blend of those who worked in front of and behind the cameras.

The other extras are some archival features from the time, promoting the story and making it sound a lot more exciting than it turns out to be, a look at the locations used for filming today and a feature on the seventh Doctor’s run in the comic strips.  As usual, the extras are interesting for a one-time viewing, but may not be something you’ll come back to again and again.

If you’re a “Doctor Who” completist, then odds are nothing I’ve said here will disuade from picking this one up.   The extras make it worth it for the completists among us (myself included), but if you’re a casual or a newer fan and want to see the seventh Doctor’s era when it’s better (and it gets better from here), check out “Remembrance of the Daleks” or “The Curse of Fenric.”