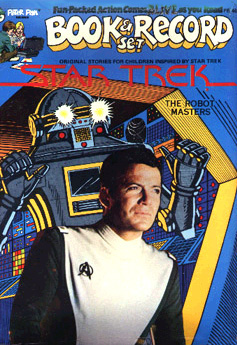 Farpoint Media’s podcast “Radio Yesterday” has the first of two, unique audio offerings from the “Star Trek” universe this week.

It’s the “Robot Masters” story from the popular Power Records line of the 1970s.  For those of you unfamiliar with Power Records, the line offered audio adventures for popular movie and comic book characters of the era, including Batman, Superman, Spider-Man, Planet of the Apes and, of course, Star Trek.

Some stories were accompanied by a comic book adaptation while others were grouped together on an LP with three to five stories per disc.

The “Star Trek” line came out in three groups–the first of which included stories by Alan Dean Foster.  “Robot Masters” is from a third set that came out around the time “Star Trek: The Motion Picture” hit theaters.

The Power Records line was one of the ways I was introduced to the “Star Trek” universe growing up.   If you’re like me and have fond memories of the stories, you definitely want to check out this week and next week’s episode of Radio Yesterday.    And if you haven’t heard them, you’re in for a treat–though the voices will be different since the familar roles were recast by the stock actors who worked on a lot of the Power Records output.

And if you want to hear more from the Power Records of the 70s and take a trip down memroy lane, check out Power Records Plaza.  The site offers archives of the audio stories and scans of some of the accompanying comic-book adapations.