A loving mash-up satire that doesn’t overstay its welcome 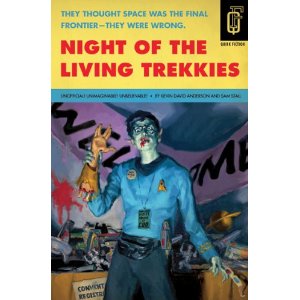 Ever since zombies invaded the pages of Jane Austen with great success, publishers have been searching for the next great mash-up novel. Earlier this year, we got “Abraham Lincoln, Vampire Hunter,” a funny take on the historical biography that asked what if Honest Abe was really a vampire slayer? On the other end of the spectrum is the Hugo-nominated zombie/steampunk novel “Boneshaker.”

And then, somewhere in the middle is the mash-up, “Night of the Living Trekkies.” The story is a satire, bringing the horror of the zombie apocalypse to a “Star Trek” convention.

“Trekkies” is a clever satire that works well enough in small gulps. Each chapter title is cleverly taken from the title of an episode of “Star Trek,” and each chapter is packed with in-jokes and one-liners for fans of each generation of “Star Trek.”

The story finds Jim Pike, a former special forces soldier who quit the military after stints in Iraq, working at small hotel that is hosting the local “Star Trek” con. After Iraq, Jim wanted a quiet job where he wouldn’t have to think too much and working at the hotel seems to fit the bill. However, as the con gets up and running, Jim finds that things are slowly getting more and more bizarre, leading up to the discovery that zombie are attacking the hotel. Jim becomes the reluctant leader of a small group of survivors who work their way through the hotel, trying not to become zombies themselves and to escape.

One of the big problems with satirical genre stories is the author or authors try too hard to emulate the style of two of the greats in the field–Douglas Adams and Terry Pratchett. Both men make being funny, satirical and witty look easy as you read it, but anyone who’s tried to emulate their style knows it’s not easy to do. “Trekkies” isn’t in the same stratosphere of an Adams or Pratchett story, but authors Kevin David Anderson, and Sam Stall are able to keep the jokes coming at a reasonable pace and to have the story keep moving. My big fear picking up the novel was that it could become like an “SNL” skit and overstay its welcome. And while the story, as a whole, loses a bit of momentum from the time we figure out zombies are attacking the con and our team of heroes getting together to try and escape, the story and jokes never go hopelessly off the rails.

Reading “Trekkies,” I kept having flashbacks to Sharon McCrumb’s two classic murder-at-genre-convention novels, “Bimbos of the Death Sun” and “Zombies of the Gene Pool.” And while “Trekkies” isn’t quite as entertaining as those two novels, it’s still a fun little read. It’s a far more specific genre satire than either of McCrumb’s novels.

If you love and know your “Trek,” there are a wealth of in-jokes and fun to be had here. The novel may not be as clever as some of the other zombie mash-ups, but it’s still a fun read and well worth picking up if you like zombies and you like “Star Trek.”