As we celebrate the summer of ’82’s thirtieth anniversary, some intriguing facts about some of our favorite films are coming to light.

Among them is a little gem about what many consider the best of the Star Trek movies, The Wrath of Khan.

According to Badass Digest, Kirk and Khan would have shared another connection in the film–they were both fathers.

In an issue of Starblazer Magazine, the original plot thread is detailed.

Khan originally had a child. In the movie the child first appears as Terrell and Chekov come upon the Botany Bay; Chekov sees the kid through a window briefly, and then the child scurries away. It’s a moment of added tension as the two examine the wreckage of the ancient ship.

The baby doesn’t show up again until the very end, and his return comes at a very sobering time. As the USS Reliant is in ruins, as Khan is all but defeated, he activates the Genesis Device, which still sits on the transporter pad. Attracted by the bright lights, the baby crawls towards the device… which then detonates, turning the Mutari Nebula into the Genesis Planet and killing everybody. 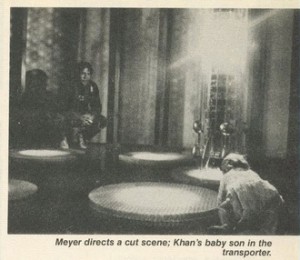 There are photos of director Nicholas Meyer filming some of these scenes, but they haven’t yet been included on a DVD or Blu-Ray release. The footage may no longer exist.