Purchase a copy of “Terminator Salvation: From the Ashes” 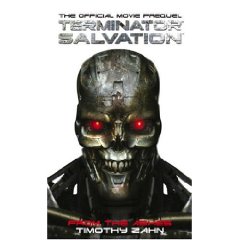 Fan-favorite Timothy Zhan has proven that he can create incredibly readable, highly addictive original works and tie-in novels during his long and distinguished career. He helped launch the modern “Star Wars” novel over 20 years ago and now he turns his attention to the “Terminator” universe with a prequel to this summer’s “Terminator: Salvation.”

Given Zhan’s solid background is creating futuristic military battles that are both engaged and easy for the reader to follow, the match of Zhan with the “Terminator” universe is a match made in heaven. Set just before the events of the upcoming film, Zhan chronicles events in Los Angeles in the aftermath of the initial Skynet attack and leading up to what we’ll see on the big-screen later this year. The military battles are the strength of this story, with Zhan making them both thrilling and accessible to readers.

However, because this is a prequel story, there are some limits on what Zhan can do–especially when it comes to the characters. There are some instantly recognizable characters such as John and Kate Connor and Kyle Reese. There are also a lot of other characters in the story, who I presume will be included in the upcoming film. Zhan’s job is clearly to give some backstory on how certain players get into certain situations and places by the start of the film and while he does a good job telling that story, you can tell the constraints are limiting him. (For a good comparison, read any of Zhan’s original “Star Wars” trilogy of novels where he has more freedom to play with the characters).

This weakness leads to some character moments that are too obviously telegraphed and some characters who are clearly brought into the story to be little more than red-shirts where on classic “Star Trek.”

However, there is more that works in the story than doesn’t. Fans of the “Terminator” franchise will want to devour this one before they hit theaters. And casual fans may find themselves wanting to pick it up after seeing the film. Either way, you’re in for a treat in the universe of media tie-in novels.