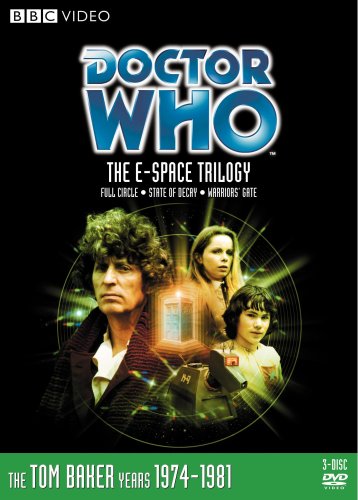 “Doctor Who: The E-Space Trilogy” is available on DVD and can be purchased at Amazon

While the extras aren’t as solid as those on “The Key to Time” box-set, the stories themselves are better.

Answering a summons to return to Gallifrey, the Doctor, Romana and K-9 find themselves trapped in a parallel universe and struggling to find a way out in the latest classic “Doctor Who” box-set, “The E-Space Trilogy.”  The trilogy was one of the few box-sets released in the original VHS range, so the fact that the BBC would choose to release these three fairly interconnected stories in a DVD box set isn’t really that much of a surprise.

Produced during John Nathan Turner’s first season and the only season under the helm of Christopher H. Bidmead as script-editor, “The E-Space Trilogy” sits squarely in the center of season 18 and the loose story arc of the season.  The season was Tom Baker’s last in the role and, arguably, one of his best and each story tried to be a bit more scientifically grounded under the guidance of Bidmead.  It was an era when John Nathan-Turner clearly took the series forward and it’s one that is clearly designed to be watched multiple times in order to pick up exactly what’s going on in the stories (and to see the overall arc of the season).

The season arc is one of closed systems that are stuck at some point in their development or, most often than not, in a slow, inevitable decline.  Each story finds the Doctor arriving on the scene and acting as a catalyst for change in many ways–whether by his direct intervention or not.  It’s also a season that finds the Doctor himself inevitable making the ultimate change from the fourth to the fifth Doctor.  But that’s another box-set…

“The E-Space Trilogy” is a collection of three, solid, inter-connected stories.  As with most classic “Who” it’s not required that you watch them in order, but this is one of those rare instances where watching them in order will make for an overall more rewarding experience.

The trilogy begins with “Full Circle,” which holds two big distinctions in the show’s history.  It a story commissioned by Bidmead from a spec script from fan, Andrew Smith and it features the introduction of one of the more controversial companions, Adric.  For a fan-written story, it’s actually a fairly solid entry in not only the trilogy but the series as a whole.

Falling through a time and space distortion, the TARDIS becomes trapped in E-Space, a universe that is like ours only greener and with negative coordinates.  The Doctor and Romana land on a planet called Alzarius, which is undergoing a change.  The change is known as mist-fall and finds strange creatures rising from the swamps and a bunch of (poorly visually achieved) spiders hatching.  There’s a link between the creatures in the swamps, the spiders and the humans on the planet who are endlessly repairing a space-ship for its eventual departure–and it’s one that works fairly well if you don’t invest too much deep thought into it (as several of those involved with the story point out in the various extras on the set).

“Full Circle” is a fairly interesting change of pace for the classic series in that while it does feature the typical standards of the plucky rebels and a firmly entrenched government, it doesn’t have the Doctor entering the scene to overthrow the established rulers.  Instead, the Doctor and Romana enter the story to serve as a catalyst for change in the society and facing a threat that comes from the biology of those involved.  It’s a nice tweaking of the classic “Who” formula and one that works well, again provided that you don’t think too much about the central twist in the story.  It also provides a nice showcase for Tom Baker as the fourth Doctor, whose performance is a lot more restrained than in the previous season.  A scene where Baker confronts the ruling council of the starliner over their involvement in ethically questionable experiments on one of the Marsh-creatures is among the highlights of not only this story, but the era.

Next up is “State of Decay,”  by long-time “Who” veteran Terrance Dicks.  The story itself was commissioned by Phillip Hinchcliffe but was then shelved by the BBC because it featured vampires.  As is often-repeated in the extras, the BBC decided to do their own production of “Dracula” and wouldn’t allow “Who” to do their own vampire story at the time. The script was shelved until Nathan-Turner found it and had Dicks update it for season 18.  Of the stories in the season, it’s the one that feels most like the hey-day of “Who” under Hinchcliffe with lots of Gothic elements including a shadowy castle, Gothic vampires and a sense of dread and horror that permeates the whole affair.  About the only let-down is the much-referred to Great Vampire, who is built-up spectacularly only to be little more than a poorly-realized visual effect in the final episode.  It’s a shame because the build-up is so strong and there are some nice links to Time Lord mythology in the story.

Beyond the story itself, “Decay” also is one of those fun stories to watch within the context of knowing the series’ history and backstory.   Tom Baker is in poor health during filming, looking visibly thinner and having to wear a wig (the illness took a toll on his famous curls). There’s also a lot of on-set tension between the regulars with Lalla Ward and Matthew Waterhouse clearly not caring much for each other (though that lends well to the tension between the two characters in the story).  It’s also during a particularly combative period in the  off-screen relationship between Ward and Baker.  (Referred to at length in the extras).  So you can have  fun figuring out how bitter the argument was during filming as you watch to see if the two will make eye-contact during scenes together.

Finally, there’s “Warrior’s Gate,” which may be the strongest story from the trilogy.  It’s one of the prime examples of a story that needs multiple viewings to scratch the surface of what exactly is happening here.  It’s not quite as dense as “Ghost Light” would be later, but it’s still complex enough to keep you engaged during its four episodes and almost demands you re-watch it again as soon as it’s over.  It’s visually quite stunning with a very minimalist set–all studio bound and large chunks taking place on a white background.

The story is set at the crossroads between E-Space and N-Space and involves a gateway between the two, a telepathic race of aliens being kept in slavery and a spaceship crew of mercenaries trapped there in a ship that is slowly causing the constriction of the area.  Yes, it doesn’t make a lot of sense on paper, but it does within the story itself.  It also features a lot of jumping about back and forth among various eras in the history of the slave-race which serves to grey certain aspects of the plight of these beings.

It’s a strange, odd and utterly compelling story that is unlike anything else in the “Doctor Who” canon.

Taken as a whole, these are three prime examples of exactly why season 18 worked as well as it did–and why it’s so divisive among fans.

As always, the “Doctor Who” DVD line shows why they are the gold-standard when it comes to TV on DVD releases.  The picture and sound are all remastered, meaning the stories have never looked or sounded better.  Even better is each story features an incidental music only track.  While some may not like the music of this era, I find each story in this set has some of the most memorable incidental music in the series’ run and it was a pleasure to sit back and just enjoy it on the separate tracks.

Each story features a commentary by various parties involved.  Matthew Waterhouse features on two of the three commentaries–his first story and “State of Decay.”  Interestingly, we find that Waterhouse nearly declined commenting on “Full Circle” because of negative memories of working on the story itself.   He also admits he didn’t review the story pre-commentary, so we do get a lot of honest reaction from him to the story itself and about his own work on the show.

He’s joined by Bidmead and writer Smith on “Full Circle,” which is a fairly interesting commentary about the script’s history and development, as well as some of the process of bringing the story to life.   The “State of Decay” commentary is decent enough, those Terrance Dicks and the director do take some potshots at Bidmead’s script editing.

The one commentary I was most looking forward to, “Warriors Gate” is something of a mixed bag.  It features the director, who talks about the technical difficulties of shooting on the stark background and his being fired and then re-hired the first day along with a host of others.  The problem is that are almost too many cooks here, leading to Lalla Ward being talked over by an overly enthusiastic Matt Irvine, the special effects coordinator.   It might have been nice to hear more from Ward on her final story on the show…

As for the rest of the extras, they’re hit or miss. The hits are the documentaries devoted to the stories themselves.  Each story gets an in-depth look at its creation and background, though there is some repetition between these and the commentaries.  There is one glaring absence–that of Tom Baker.  I know that given their off-screen difficulties, getting Baker and Ward into the studio together would be next to impossible. But it would still be nice to get some reaction or thoughts from the man who played the Doctor as part of this set.   Also “Who” related are some short features on Romana’s choice of fashion (fun and light, nothing Earth-shattering) and Matthew Waterhouse’s time on the show.

Then there are the extras that can only be classified as tangentially related to the stories themselves.  The strongest is the one on parallel universes from “Full Circle.”  Then there are the exploration of vampire mythology on the “State of Decay” disc and the head-scratching one on the use of blood in such myths and a history of it.  Both are a bit of a stretch, but sort of tie-in to the stories.  They’re not what I’d call essential viewing and they’re no where near as interesting as those related to the background of the stories themselves.  It might have been nice for a documentary more on the decision to create this trilogy or its place in the overall theme/arc of the season.   Given that we’ve only got one more season 18 story to release on DVD, I’m not expecting to see such an extra any time soon.

While the extras aren’t as solid as those on “The Key to Time” box-set from earlier this year, the stories themselves are, on the whole, better.   This set isn’t necessarily the best entry point to classic “Who” for new fans, but the stories are still satisfying and accessible enough to allow new fans into the fun and are definitely worth a review by classic series fans who haven’t seen them lately.