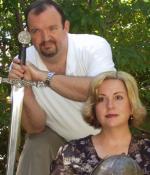 Michael and Summer are joined in the studio this week by Tim and special guest Philip from Australia to join in the geeking.

Movie Talk: Production on Terminator Salvation: The Future Begins set to begin in 3 months, with the hopes of jump-starting the franchise in the future setting of an adult John Connor.

TV Talk: J. J. Abrams, Alex Kurtzman and Roberto Orci are returning to the small screen in a new Abrams project titled “Fringe”. This mashup of X-Files, Altered States and The Twilight Zone will feature a mismatched team exploring paranormal mysteries in self-contained episodes sprinkled with a dash of humor.

Next, NBC has given the greenlight to “Tapped”, a series focusing on the stories of everyday people who are “tapped-in” to a frequency at which God is transmitting messages to them, that are intended to move them to help the rest of humanity — one person at a time.

Finally, while some very good shows aren’t getting the ratings or attention they deserve here in the US, many of them are finding more popularity and more buzz in overseas markets.

Interview: Fan favorite Tracy Hickman joins us to give us an update on the animated Dragonlance movie, from his joy at hearing some of the characters voices come to life, and he lets us hear small samples of the music that’ll be featured in the film.

No release date as of yet, but you can be sure we’ll let you know as soon as we know!

Future Talk: SciFi Channel is expanding it’s slate of fantasy and paranormal offerings for the 2008 season, with “Ghost Hunters International”, and a new SciFi Original Movie called “Ba’al”, starring Jeremy London, and Dina Meyer will star in “Riddles of the Sphinx”.

Next, Vin Diesel may be in consideration to be the next Terminator, but first, he’s set to reunite with Paul Walker for the fourth “Fast and the Furious” movie.

SAVE DRESDEN – Send in those drumsticks (not the chicken kind) to SCI FI Channel and save Harry from cancellation hell!