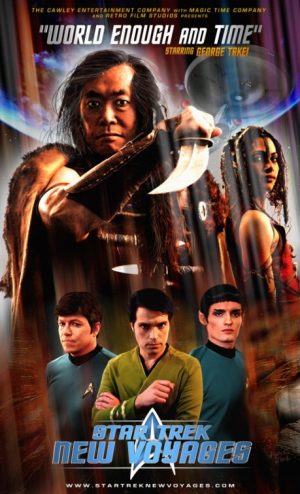 Executive producer and New Voyages lead actor, James Cawley (Captain Kirk) has definitely raised the bar for fan films to such a high level with this production that every other Star Trek fan film venture will have to step up their game to even begin to approach it in quality and professionalism. I thought Cawley had reached the water mark with Walter Koenig’s performance in “To Serve All My Days,” but this George Takei episode exceeds even that one by a measure of 100 fold.

The story was captivating and in good old fashion Gene Roddenberry style. Takei has never been better and his performance raised the talents of Cawley, Quinn, Kelly and the rest of the cast and crew by leaps. Actor John Lim, who portrays the younger Sulu that we remember from the bridge of the 1960’s original series is totally believable as Sulu, even down to Takei’s rich bravado and peculiar verbal staccato. Cawley can be proud of his acting choices for each character in his rich series. To fill the shoes of the likes of Nimoy, Kelley, Koenig, Takei, Nichols and Doohan is a near impossible task, but he does it almost flawlessly with Quinn as Spock, Kelly as Bones, Bray is near perfect as Chekov and Lim is Sulu. Charles Root is a perfect Scotty, right down to that great Scottish accent and, if it were possible, Julienne Irons is even more beautifully enchanting as Uhura.

Now to the real geek-test of a Star Trek film, the technology, look and feel. “World Enough and Time” completely captures the look and feel of the original series, but with the astonishing added benefit of really fabulous special effects that rival anything seen in multi-million dollar film budgets today. If you thought the digitally remastered versions of the old classic series were great looking, wait until you feast your eyes on what Cawley and his crew of sfx and CGI geniuses have cooked up in this film episode. It made my jaw drop with astonishment and geek-gasim glee. 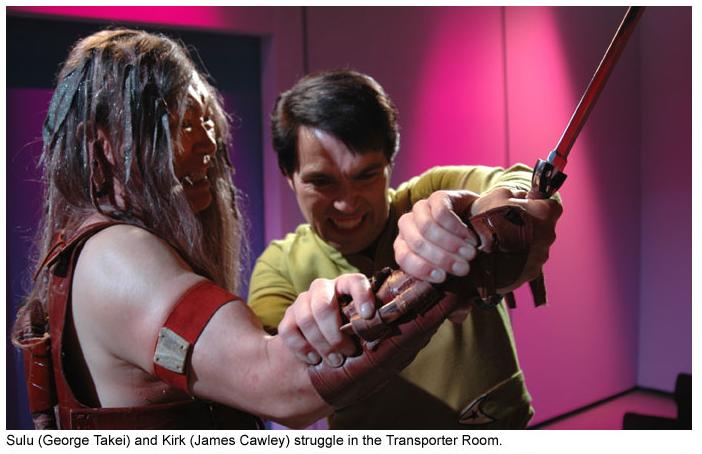 Last night’s premiere did have one drawback, the live feed from the international premiere hosted at The Fine Arts Theater in Beverly Hills California, and which was attended by George Takei, Cawley and many members of the cast, crashed and burned just before it was due to air on the internet LIVE. But the good news is the entire event was recorded and will be available this Saturday, August 25, 2007 from the Star Trek New Voyages official website.

Those who know me and my reviewing habits are aware that for me to give anything 4 stars on my Uncle Sam scale is a rare event. To receive 5 stars from me would require that the film or video walked on water. In fact, I think in all the years I have been reviewing films, you can count on one hand those that, in my opinion, rated the BIG 5. So, with that in mind — on the Uncle Sam scale of 0 to 5 stars, I give “Star Trek New Voyages — World Enough and Time” 5 stars!