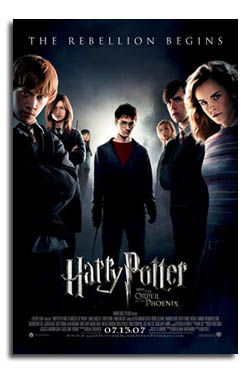 After stunning our muggle readers with my less than positive review of the fourth installment of J.K. Rowling’s beloved fantasy series, Harry Potter and the Goblet of Fire, it took me weeks to wade through the massive amounts of hate mail and death threats I received from the franchise’s diehard fans. As easy as it would have been for me to give the film a pass and avoid the negative limelight, the disjointed pacing and poor adaptation of the series’ weakest novel made for a rather lackluster installment in the Harry Potter cinematic lore. However with the arrival of the fifth and darkest installment yet, Harry Potter and the Order of the Phoenix bounces back, but not without its shortcomings.

With the return of the franchise villain, Lord Voldemort, the wizarding world has been caught in a panic. The Ministry of Magic has gone into complete denial, smearing Hogwarts’ headmaster, Dumbledore, and the world of witchcraft’s prodigal son, Harry Potter, with propaganda that their claims of the Dark Lord’s return have been made up in order to help Dumbledore usurp control of the Ministry. With changes being made to the administration at Hogwarts, standardized tests, girls, rumors and Lord Voldemort on his plate, Order of the Phoenix is sure to be Harry Potter’s toughest year at Hogwarts yet.

One of the biggest strengths of the series has always been the phenomenal casting of some of the best British thespians working in cinema today, and the fifth installment is no different. Yet again the child stars of the franchise have continued to grow and mature as actors; however Emma Watson and Rupert Grint take a back seat in this installment to let several new youngsters, who together form “Dumbledore’s Army,” get their time to shine. Perhaps the most charming of these new child castings is Evanna Lynch, who plays the delightfully strange Luna Lovegood.

While the collection of youngsters hold their own, it is hard for them not to be outdone by the wealth of adult talent in the series. With great new additions like Helena Bonham Carter and Imelda Staunton, I think it is safe to say that Order of the Phoenix has the best ensemble cast in any Harry Potter film yet. Thank the lord though that Alan Rickman is given more to do in this installment, because his pitch perfect performance as the evil Professor Snape was something that was sorely lacking in the fourth film, and here he again steals every single one of his scenes.

Coming in so late in the series, director David Yates had the difficult challenge of preserving a style that audiences around the world have come to love and expect. The director continues the darker style that the third installment’s director, Alfanso Cauron, started in Prisoner of Azkaban, but never manages to branch off and put his own stylistic stamp on Order of the Phoenix, somthing that is problematic in all intermediary sequels.

The real strength of Order of the Phoenix is how smoothly Yates and screenwriter Michael Goldenberg adapted Rowling’s longest novel. Cramming several hundreds of pages of information into a two and half hour motion picture is a difficult feat, especially with fans as ravenous as the ones who love their Harry Potter, but credit must go to the filmmakers for hitting on all the emotionally important moments in the film. While the last film meandered, throwing unnecessary bones at fans of the book, Order of the Phoenix stays on track allowing for a much smoother adaptation of the narrative.

Of course this all culminates in one of the most riveting and visually stunning confrontations in the series yet. For the first time in a Harry Potter film the villains are actually threatening and audiences are treated to the series first truly epic battle. Ralph Fiennes looks far more comfortable in the role of Lord Voldemort, and this time he may actually strike some terror into the hearts of viewers.

While some fans of the novel will be disappointed in the picture’s handling of the stories most emotionally jarring turning point, Order of the Phoenix is a far stronger entry than the lackluster 2005 effort. Though it could be possible that the best cinematic offering in the series is behind us there is no denying that Harry Potter and the Order of the Phoenix is simply bewitching.