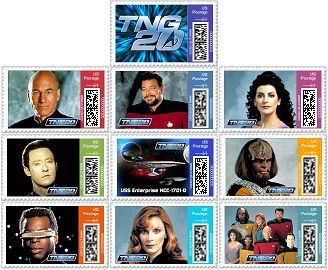 This beautiful set of stamps honors the incredibly popular television series that garnered fans throughout the globe while presenting Gene Roddenberry’s positive message of hope for the future of mankind.

Each set includes 10 pages of stamps (10 stamps per page), so you will have 100 total stamps as pictured.

Included in this set are:

You could use the stamps to mail letters here on Earth (in The United States) but more likely they will remain in homes as a true collectible. Only 500 of these exclusive sets are being made and just 200 of the sets are being offered today on eBAY.

Each set will include a document denoting that there are only 500 sets produced.