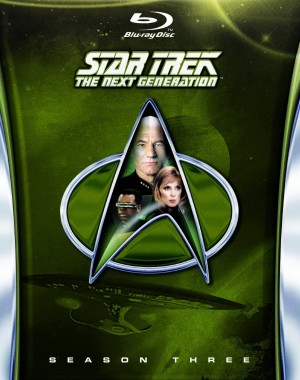 While Star Trek: The Next Generation was a hit right out of the gate, most fans agree that it’s in the third season when the series really comes into its own.  What’s interesting about  reviewing this pivotal season (not only for Next Generation but the franchise as a whole) is how few of the behind-the-scenes people felt like the series had turned a corner based on the feedback they were getting.

In one of the documentaries looking at season three on the new Blu-Ray set, writer Ira Steven Behr says he wishes that the fan response then had been what it is now.  Behr says the majority of comments were on how the new show wasn’t the classic series and comparing characters from one generation to the next.

A quarter of a century later, it’s interesting to look back on this pivotal crossroads in Trek history.

The third season of Next Generation arrives on Blu-Ray and the series has never looked or sounded better.   The newly remastered stories take full advantage of your HD set with colors looking brilliant and vibrant and exterior shots being just plain breath-taking.  (It helps that the season starts off with a superb exterior shot.  It’s stunning).  The dedication and care put into this upgrade is seen over and over again on-screen through all twenty-six third season episodes.

But the biggest selling point of season three is the episodes themselves.  It’s the year the series found its voice and created the template for not only how the series would run for several more years but how the franchise would run for the next decade or so on our screens.  Featuring the instant classics like “Yesterday’s Enterprise,” “The Offspring,” “Sins of the Father” and “Best of Both Worlds, Part One,” this is when Next Generation came into its own and become something special.   And while there is a clunker or two thrown into the season, overall the good to great episodes clearly outweigh the bad episodes.   (I’ll admit a bias here—the third season of Next Generation is my favorite of the series and I was eager to see it on Blu-Ray. It does not disappoint).

Even if you’ve got the DVD sets, you will want to consider an upgrade to these sets. Not just for how good it looks and sounds but for the extras.   Now that close to two decades have passed since the show aired, those gathered together for the extras can be honest in looking back at the series and the third season.  The three-part documentary on season three is fascinating and compelling. Compared to the ported extras from the DVD set that rarely delve into the tension behind the scenes to create the episodes, these are an eye-opening, honest and refreshing look at the making of the show.

There’s also an hour plus conversation with four of writers from the series, Ron Moore, Brannon Braga, Rene Echevaria and Naren Shankar hosted by Seth McFarlane.  McFarlane is clearly a fan of Trek and can quickly recall episode plots and titles as the writers reminisce about working on the show for their tenure. The comments are not only confined to season three and this is one of the highlights of the sets so far. (The good news is that several of the writers stick around to offer commentaries on episodes they wrote in the set).

But if there’s one theme that carries the extras it’s how Next Generation and Star Trek were saved by the addition of Michael Pillar.  Pillar took over as show-runner, creating an open script submission policy and running the writers room in the third season and beyond. Pillar’s vision and voice are stamped all over Next Generation.  In many ways, he is to Next Gen what Gene Coon was to classic Trek.  Unfortunately, Pillar is no long with us so we can’t get his insights into working on Trek during this time.  And the extras are honest, looking at both the positive and negatives of Pillar’s leadership and guidance of the show.

If you’re a behind-the-scenes geek, you’re going to love the extras on this set.

If you’re a Star Trek fan, you’ll love the episodes in this twenty-six episode set.

The third season is the best Blu-Ray set yet and once again shows why these disc are the standard to which all other TV releases can and should strive to attain.