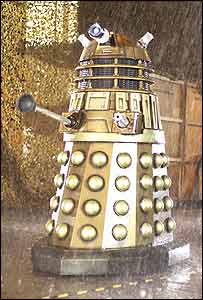 Before the season began, I was talking to some fellow “Doctor Who” fans about what we most wanted to see in series three.

Jokingly, I said I’d love to see the series get a new cliffhanger, since for the past two series, every cliffhanger has been the Doctor and/or the companion being stalked by an alien menace or the return of the Daleks.

This week, “Daleks in Manhattan” got the first chance of the new series to step up and give us a new cliffhanger.

When you boil it down, the cliffhanger is something old, something new. It’s the emergence of a new threat, though in this case since it’s a human/Dalek hybrid, I’m not sure it counts as a new cliffhanger. To me, it still feels like a big reveal of the Doctor’s greatest enemies, even if the enemy has taken on some kind of new form.

But what about the rest of the episode?

For the most part, it was another solid entry for the third series of the new “Doctor Who.” Early on, series three seems to have found some of the assuredness of storytelling that series one had in the middle to later episodes of the season. And while it’s yet to produce an out and out classic, it’s getting farily close each week.

My real issue with trying to review “Daleks in Manhattan” is that its only the first half of the story. My assessment of it could change next week, based on how everything plays out.

The Doctor and Martha arrive in New York in 1930, during the Great Depression. The Empire State Building is under construction and we learn the Daleks are behind it. They have some kind of schedule they’re trying to meet and are working their workers to the point of exhaustion and beyond. Again, we’re not quite sure yet what the overall plan is for this, but I am sure we’ll find out more next week.

The Doctor discovers that people from Hooverville (the shanty for those feeling the brunt of the Depression) are disappearing and decides to look into it. Before you know it, the Doctor is exploring the sewers and finding human/pig hybrids down there who are mindless servants for the Daleks. (Makes me wish they’d brought back the Ogrons..but that’s the old school “Who” fan in me). The Daleks, meanwhile, are revealed within the first ten minutes of the story and it turns out its the same four Daleks we last saw in “Doomsday.” The Daleks are looking for some way to ensure their race survives. Part of this is creating a Dalek/human hybrid that is revealed in the final moments of the episode.

Along the way, Martha and the Doctor meet some new friends in Hooverville and a bustling theater. The plotline of Tellulah, the lead of the show is the weakest part of the story. It ties only remotely into the Dalek plotline and the actress playing Tellulah features one of the worst American accents I’ve ever heard. (It’s only topped by the bad accent of the guy from Tennessee….)

Where the episode works best is when it focuses on the Doctor and Martha. Freeyma Angema continues to make you forget about Rose as she provides a great counterpoint to David Tennant’s Doctor (she may go down as the definitive Tennant companion). And you can just see Tennant getting more and more comfortable as the Doctor, especially in the scenes where he discovers that he’s facing the Daleks. There’s a dark moment where he laments that the Daleks keep on surviving, while he loses everything that is nicely done and superbly delivered by Tennant.

There’s also hints of the Doctor’s fear and respect for his old enemies when he infiltrates their headquarters as part of a group of prisoners and makes Martha question the Daleks so he won’t have to reveal he’s there (though how the Daleks haven’t seen him yet, I’m not sure.)

The episode builds up to an interesting point that left me curious to see where it might all end up next week.

As always, the period detail by the BBC is second to none and beyond a few bad accents, the supporting cast is more than up to the call in the roles they are given.

Next up: The Daleks attack Hooverville….