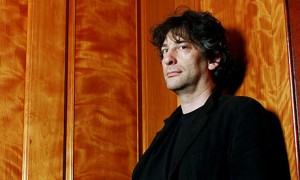 Neil Gaiman’s first script for Doctor Who only took forty-nine years. Thankfully, fans didn’t have to wait that long for a second script from the best-selling author.

Gaiman is back this week with a story featuring the return of the Cybermen.

Gaiman has been a fan of the long-running series for a while now and he was recently asked if he’d like to take over the reigns of producer when Steven Moffat leaves.

“I would love to do more Doctor Who. There’s so much stuff I’d love to do. Right now, it’s impossible. Right now I’m looking at it with that kind of horrible feeling that you genuinely can’t stop and raid the sweet shop. You’re on the bus and you’re going past and you’re going to be late for school if you go… so I tend to laugh when people say “Would you like to be the next showrunner after Moffat?” I don’t even have time to write an episode! You want me to be showrunner? Nothing else will happen in my entire life!” Gaiman says.

Of course, Gaiman said after “The Doctor’s Wife” he wasn’t sure when he’d be back for another installment. So, hopefully he can find time to pen another episode of two soon.

It just looks like he won’t be back as show runner.