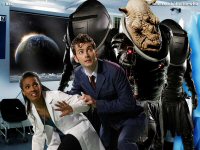 The post-Rose Tyler era of “Doctor Who” officially began Saturday night with the premiere of series three. As a long-time fan of “Doctor Who,” while I liked Rose, I realize that change is part of the show and most companions don’t stay on board the TARDIS for more than a year or two.

That said, I was curious to see where excutive producer Russell T. Davis would take us with the latest companion for the hit sci-fi series.

Just as “Rose” did three years ago, “Smith and Jones” gives us an interesting thumb-nail sketch of the new companion. We meet Martha Jones, a medical student who is quickly drawn into the Doctor’s orbit when the hospital she’s working at is transported up to the moon. Martha’s lack of panic, calm demanor and skepticism draw the Doctor to her as the two of them piece together what happened. A rhino-looking race called the Jihdoon have moved the hospital to the moon in order to have jurisdiction to hunt down an alien criminal lurking in the hospital. The alien looks human and can absord human blood in order to mask itself from the Judoon. The Doctor and Martha must race against time to find the alien, give her to the Judoon and convince them to not extereminate everyone in the hospital for harboring a fugitive. (Judoon justice is swift and final).

Unlike last year’s muddled and confusing “New Earth,” “Smith and Jones” is a solid start to the third-series. David Tennant is firmly established as the Doctor, thus leaving the script time to give us hints as to just who Martha Jones is. Davis shows us a bit of Martha’s dysfunctional family and the brief glimpses we get of Martha’s intelligence and savy are well done. She may not make new fans forget Rose quickly, but she’s different enough to work well. Tennant and Freeman Agyeamn have a good chemistry and it should be interesting to see where this Doctor/companion partnership goes. (Indeed, there’s a hint of the 4th Doctor/Sarah Jane in the storyline as the Doctor promises Martha one quick trip to thank her for the help she gave him on the moon and then it’s quickly home).

There are even a few hints thrown in as to where this season might go. We hear about the mysterious Mr. Saxon, who rumor has it will play a significant role as the season goes along.

While “Smith and Jones” is a nice start to the season, it still lacks the distinctive energy that made “Rose” such an instant hit. The episodes moves at a good pace but it lacks the same energy and excitement “Rose” had. Part of that may be that we’re becoming used to the good Doctor turning up on our screens again on an annual basis.

And, I must add one thing–as an old-school “Doctor Who” fan, I’m getting a bit weary of the romantic subtext that Davis forces upon the Doctor/companion storyline. The Doctor kisses Martha (it’s a ploy to lead the Judoon to him and create a diversion at the same time) and there’s hints of an attraction between the two once Martha is invited on-board the TARDIS. I hate to sound like a stick in the mud, but part of what made the Doctor the Doctor in the original series was his alien aloofness toward those who travelled with him. He had affection for them but it wasn’t a romantic interest, despite what Davis would try and tell us by way of a ret-con.

But that’s a fairly minor gripe in what is, overall, a solid story. And visually the story is stunning, as always. Seeing the Judoon so expertly realizes makes this fan wonder what the current effects team would do if they were to bring back the popular Sontarans for an episode or two.

So, “Doctor Who” is back with a solid episode that hints at interesting things to come this season.

Next week: A visit to the time of Shakespeare….