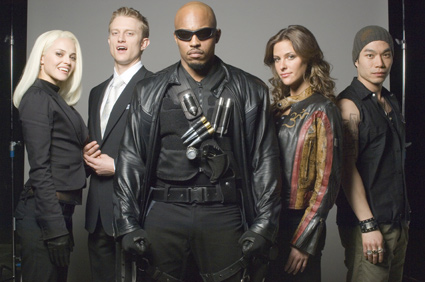 If you like seeing vampires killed by the dozens and won’t be too put off by some pretty campy acting then SPIKE TV’s “Blade: The Series” might be something you will enjoy watching.

For me, the two-hour pilot was entertaining enough to keep me watching (I put it on my DVR so I could whip through those annoying ads), so I only had to deal with about 1-hour and 45-minutes of vampires disentigrating from Blade’s forthright and deft sword handling.

I will say one thing, while Kirk “Sticky” Jones lacks some of the charisma of Wesley Snipes, he does bring a freshness to the role that is a bit less brooding than Snipes. He handles himself well in the fight scenes and I was impressed with his martial arts abilities, however, his acting is rigid and forced at times. Hopefully, if SPIKE doesn’t pull the plug too early, Jones will grow into the part and relax those tense acting muscles.

The real bright spot, at least for me, was seeing Randy Quaid in a guest appearance. I love watching this guy perform in any role, be it movies, stage or television. He has that rare gift of being whatever he is called upon to be and making it seem real.

I felt the opening scene of the pilot was a real stroke of genius showing Blade on his motorcycle running after a Russian military officer in an underground facility within the heart of Red Square and after dispatching this Russian vampire, the camera pans to the streets of Detroit, Blade’s headquarters, and the street scene is accompanied with a hard down beat rap tune. It set the pace for the rest of the opener and if the writers and production crew can keep that kind of energy going for the entire season without falling into the trap of formula TV, the show should be a relative success.

I will watch it again and if the quality continues and doesn’t grow stale, will probably make it a regular part of my television viewing schedule.

Oh yeah, before I forget: In case you missed the pilot or want to catch the show on your computer, iTunes has reached an agreement with SPIKE TV and will be offering “Blade” The Series” as one of their many video downloads.