Season seven of the HBO hit series “True Blood” will definitely be the last, according to officials at the pay channel cable outlet, and some changes are still coming. It seems we heard this once before as it pertained to season six, however, I tend to think they are telling the truth this time around. 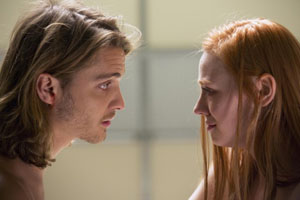 One source has stated there was an unexpected shake-up for the show’s upcoming final season now in production when Luke Grimes decided he didn’t care for the direction the writers were taking his character. Grimes, who will be featured in the upcoming big screen release of “Fifty Shades of of Grey” joined the Blood cast as James the vampire for one specific reason and that was to play off of actress Deborah Ann Wolf (Jessica Hamby). Season six had the two pair up at the vampire prison and they immediately became a hot and sizzling fan favorite couple after just two episodes, which kind of left Jason Stackhouse (Ryan Kwanten) standing there holding nothing in his hand but his six shooter – literally. The character will remain for the final season but with a different actor to be named later.

Stephen Moyer who plays vampire king Bill Compton said that bringing the series to a close after season seven was the correct thing to do. While he admits that he is not totally sure of the direction current showrunner Brian Buckner will take Blood’s farewell he does know there will be a “sad” goodbye for his character. He was able to relate in a recent interview with TVLine that this final season will get back to the Sookie (Anna Paquin)/Bill relationship with Alcide (Joe Manganiello) thrown back in there to keep it interesting.

Finally, when asked if Bill and Sookie will be the endgame for the show, Stephen honestly answered “I don’t know whether they can be, given everything that’s happened between them.”