Well, I have just finished watching the 2-part miniseries on The SciFi Channel, “Dark Kingdom: The Dragon King” and I must say I was surprisingly pleased. 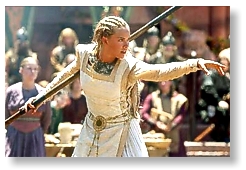 Being a Norse tale the location scenery was of course stunningly beautiful to look at. However, what surprised me most was the oustanding acting job that Kristanna Lï¿½ken did in the film. Let’s face it, she is gorgeous to look at but her acting talents in the past have been somewhat wanting. No so in this production. Her performance as Brunnhild, Queen of Iceland was quite captivating and her ability with the wielding sword and the fight combat scenes was impressive. She was exactly what one would hope to see portrayed as an amazonian queen from the frozen norselands. Kristanna was given the chance to finally show her acting chops as well in some fairly decent graphic emotional scenes that allowed her to show the vulnerability of the otherwise hard and stoic queen from the greater north regions.

The story of intrique behind the rise and fall of King Siegfried (Benno Fï¿½rmann) was well played and kept my attention for the full four hours (I DVR’d it and watched it all at once without commercial interruption – the only way to fly).

I can certainly see why many traditionalist and literary scholars believe that J.R.R. Tolkien got his inspiration for The Lord of the Ring Trilogy from this ancient Nordic legend. All the elements of TLOTR was in this tale, a cursed ring, wraiths and spirits, a hobbit type outcast wizard that brought to mind Gollum, how good men can be turned bad by lusting after the unattainable, even a faithful sidekick in the form of King Gunther’s younger brother, and the eternal love of a rags to riches king and a legendary queen. It’s all there in this one story of Siegfried, Brunnhild and the Ring of the Nibelungs; although this Nordic legend has no happy ending and there be a dragon afoot.

If you missed it this week, I have no doubt that The SciFi Channel will give it another run and if you can’t wait that long, “Dark Kingdom: The Dragon King” is available on DVD with extras and no commercials.