“Caprica” is available on DVD and can be purchased from Amazon

Clearly a pilot episode…it will leave you anxious for more 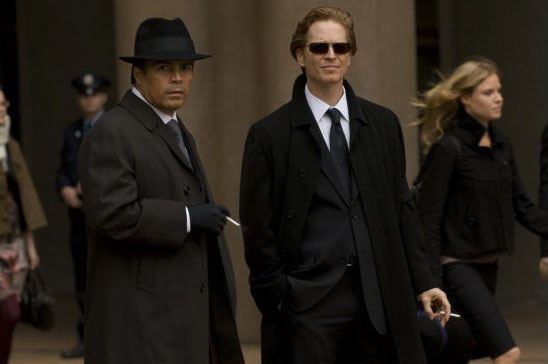 If you’re already missing “Battlestar Galactica” (and who among us isn’t?), the news that the “Caprica” pilot is hitting DVD this week is probably a tad-bit bittersweet.

Sweet because we won’t have to wait over a year to get our next taste of how Ron Moore and David Eick want to play in the “Battlestar” universe but bitter because deep down we all know that “Caprica” will never be quite the same as “Battlestar Galactica.”

Thankfully, Ron Moore and David Eick have realized this when it comes to creating “Caprica.” The story is set within the universe of “Battlestar” but it takes place 58 years before the events we saw depicted in the mini-series. As has been widely reported, “Caprica” is a prequel to the events of “Galactica” and one that plans to show us the development of the Cylons and the political and family battle between two leading families–the Greystones and the Adamas.

All of that said, a prequel can be a very difficult thing to do right–just ask the producers of “Enterprise” or George Lucas. Fans already know where the end-point is headed and this is especially true of “Caprica.” We know the creation of the Cylons won’t end well for any of these characters. So, it’s a tribute to Moore and co-writer Remi Aubuchon that one of the later moments in the story as the first Cylon model completes a successful test is one both of utter triumph and also dark foreboding.

It’s not to say that “Caprica” is perfect. Just as with the original “Battlestar Galactica” mini-series, the pilot episode presented here on DVD is a bit of a slow-starter. The universe is there, but we’ve got to set up where we’re entering it here. The pilot takes a lot of time putting the various characters into play and giving them each a moment or two to become established. Of course, since this pilot runs half the time of the mini-series for “BSG” some characters get a bit more of an introduction than others including Eric Stoltz as Dr. Daniel Greystone and Esai Morales as Joseph Adama. The pilot goes to great lengths to establish the two characters and show how their differences and similarities. It also establishes the conflict between the two that will (I assume) drive future episodes.

And that may be the biggest problem with “Caprica.” It’s clearly a pilot episode for a show and it will leave you anxious for more and to see how some of the plot threads will develop over future episodes. One fascinating thread introduced seeks to trace the origin of the religious conflict between humans and machines from “Battlestar Galactica.” If the series follows-through on this thread (and from listening to the commentary, it appears this is one of several storylines planned for the eventual series), this could make “Caprica” a compelling, fascinating series that while tied to “Galactica” will be fundamentally different from the series that spawned it. (Comments made during the commentary track seem to indicate this as Moore and Eick repeatedly say they don’t want a franchise clone along the lines of “Stargate.”)

And despite some early teen angst moments (thankfully kept to a minimum), “Caprica” is a solid, pilot debut that has this “Battlestar Galactica” fans eager and ready for more.

One final word for those with younger viewers. “Caprica” is being released as an unrated DVD and it takes full advantage of that. There’s no swearing, though the word “frak” does show up several times. However, the unrated nature of the DVD does include some nudity. Not sure how that will translate when this episode eventually makes it to TV, but it should be interesting…