We love movies and the collective experience of seeing a movie in a packed theater with other like-minded potential fans of an exciting new thriller or science fiction actioner or romantic drama. But in this unprecedented time of pandemic and social distancing, theatrical releases and premiere events have been drastically altered, curtailing that theatrical experience and inspiring studios and distributors to come up with creative ways to let people stay at home yet still enjoy the new movies we’ve gotten used to seeing every week.

One such online event was the April 9th live stream premiere of the new creature feature SEA FEVER, from Gunpowder & Sky under their sci-fi label DUST.

Written and directed by BAFTA Award-winner Neasa Hardiman, SEA FEVER follows Siobhán, a marine biology graduate student with social anxiety issues, as she goes on a field research trip on a fishing trawler in the North Atlantic. Her anxiety collides head-on with the tight-knit extended family that makes up the ship’s crew, and their superstitions about redheads on vessels heightens the tension from their side.

Things go from tense to worse when the ship’s captain secretly sails them through an exclusion zone, hoping to cut time off their voyage and to allow them to fish a rich area to bring home a much-needed catch bounty. This path takes them directly into contact with an unknown creature that attacks the ship and endangers the crew by compromising the hull.

After employing a few tricks and Siobhán’s knowledge, the ship is freed from the creature’s grasp, but a later encounter with another ship that ran afoul of the creature shows the crew exactly the fate they are heading for. What they choose to do next could affect more than just their own lives. 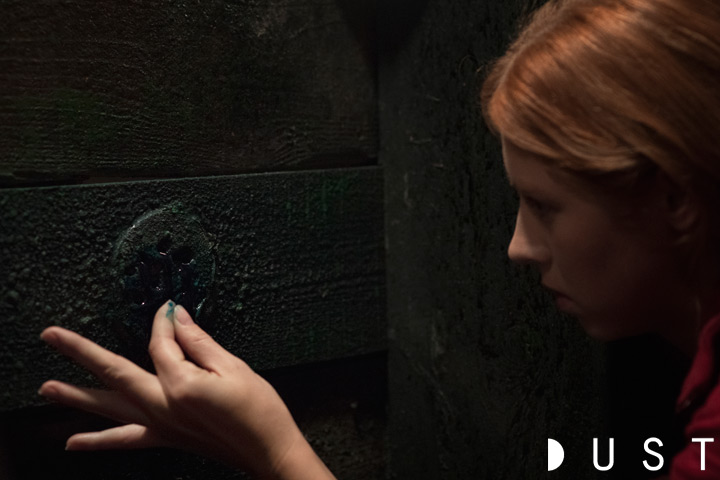 The movie is a tense scifi thriller following in the footsteps of the claustrophobia of THE ABYSS and the paranoia of THE THING and is well worth checking out in these days of lockdown.

The highlight of the premiere event was a live streamed Q&A session after the film, hosted by Janina Gavankar, featuring writer/director Neasa Hardiman and lead actors Hermione Corfield, Connie Nielsen and Dougray Scott.

Janina asks all the questions, both her own and ones fielded from viewers attending the live stream, and there’s a deep dive into what went into building the close quarters of the sets, the sense of family and tribe that drove each person to different degrees, and so much more. It’s more than apparent from her eagerness that she’s a fan of this movie and those cast & crew dedicated to getting it made.

I do hope this interview ends up as a special feature, either online somewhere or on the eventual Blu-ray. I also hope there’s a rich commentary track from the actors and the director.

And check out our own interview with Neasa Hardiman!

DUST is the first premium sci-fi entertainment brand and channel that reaches fans across all platforms. Giving voice to both emerging and established filmmakers, DUST acquires, produces and distributes all content types, from timeless classics to cutting-edge movies, series, short films, and podcasts.

Since its inception in 2016, Gunpowder & Sky has released more than 30 feature films and series, as well as hundreds of short films theatrically, on TVOD as well as in partnership with leading platforms such as HBO, Netflix, MTV, Hulu, Sky, Showtime, DirecTV, Amazon, Facebook, YouTube, and soon Quibi and HBO Max.

With an audience of more than 50M monthly unique visitors, Gunpowder & Sky’s current streaming networks include DUST, a sci-fi brand that presents thought-provoking visions of the future; ALTER, a new horror brand that explores the human condition through warped perspectives; and CUT, an unscripted comedy brand that is home to “Truth or Drink” and “Grandmas Smoking Weed”. DUST, ALTER and CUT are presently distributed on HBO, Vizio TV, Comcast FLEX, Roku, YouTube, Facebook, AT&T, DirecTV, Sinclair, Samsung TV Plus and Instagram.

Siobhán is a marine biology student who prefers spending her days alone in a lab. She has to endure a week on a ragged fishing trawler, where she’s miserably at odds with the close-knit crew. But out in the deep Atlantic, an unfathomable life form ensnares the boat. When members of the crew succumb to a strange infection, Siobhán must overcome her alienation and anxiety to win the crew’s trust, before everyone is lost.