After several movies with differing timelines in the “Terminator series, the action returns in an installment set directly after “Terminator 2: Judgment Day.” This film is a satisfying blend of new characters, old favorites, some snappy dialogue and enough action and superb visual effects that will satisfy fans of this franchise.

The story begins with jumpy footage of Sarah Connor (Linda Hamilton) warning authorities that SkyNet is going to take over in 1997. Then we hear a voice-over saying that SkyNet has been thwarted. The action jumps to 1998, where Sarah and her son John (Edward Furlong) are on a beach. Suddenly a Terminator (Arnold Schwarzenegger) shows up and executes John in front of Sarah.

The setting now moves to Mexico City in 2020. Two lovers are astounded when a woman drops from the sky after lightning crackles in the sky. They help Grace (Mackenzie Davis), who we all know is from the future.

Dani Ramos (Natalia Reyes) wakes her brother Diego (Diego Boneta) and together they travel to work at an assembly plant. They are displeased to find that machines are replacing some of their jobs.

Another crackle of lightning, this time in the day, and a new arrival (Gabriel Luna) appears in the courtyard of Dani and Diego’s apartment complex. He appears at Dani’s door where her dad greets him.

Soon Dani and Diego’s father appears at the assembly plant, claiming that his children forgot their bag lunches. When Diego points out that they already have them, Grace appears and starts fighting the new Rev-9 Terminator. She convinces Dani and Diego to escape with her.

A car chase with the Rev-9 ensues. We discover that Grace has been sent from the future to protect Dani from being killed. Grace is human but she has been augmented with technology. One downside is that she is built for bursts of energy to fight a Rev-9 but eventually burns out without medicines such as insulin.

The chase leads onto a highway where Diego is killed. It is beginning to look hopeless when a now-older Sarah Connor appears to fight the Rev-9. Grace is zoning out so Dani takes her away in Sarah’s vehicle to get medications at a pharmacy. Sarah appears and takes the two of them to a hideout. 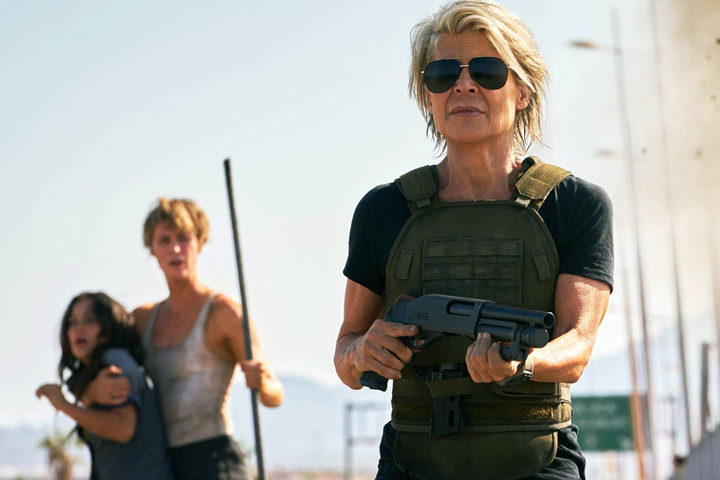 Revived, Grace reveals that there is no SkyNet in the future, but there is an artificial intelligence, Legion, which decided to wipe out humanity. It wants Dani dead.

They decide to leave the hideout. In the car, Sarah reveals that for years she has been sent text messages from an unknown person letting her know when Terminators are about to appear so she can kill them. Grace uses her tech to discover the origin of the texts. It matches coordinates that have been written on her torso as a place of refuge for her and Dani.

The location is Laredo, Texas, so Dani suggests using her uncle to get across the border. But they are apprehended by the Feds and taken to separate areas of a prison complex. The Rev-9 infiltrates the facility. Grace wakes up and flees her handlers. She pulls a fire alarm which causes chaos in the holding cells. They barely fight off the Rev-9 but continue their journey to the Laredo coordinates.

Once there, they find a house with a truck parked outside labeled “Carl’s Draperies.” When they knock on the door, “Carl” turns out to be the Terminator (Schwarzenegger) who killed John many years ago! He is unsurprised at their arrival. How will the four battle the Rev-9? 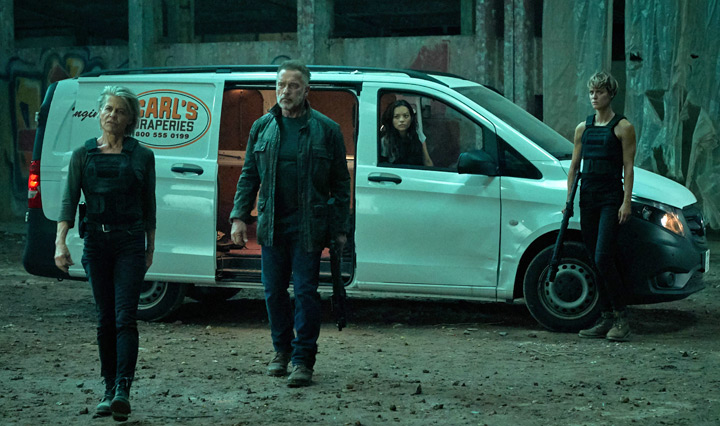 One thought that crossed my mind is how new and different “Terminator” was in 1984. There you have a woman who is frightened to death at being pursued by an unknown, very lethal killer. Nowadays, we are so used to this concept that if someone were to come up to me and say “Come with me if you want to live,” I would just steel myself, go and wait for all hell to break loose.

So Dani is shocked by the developments at the assembly plant when dealing with the Rev-9 and Grace, but she is not a completely helpless mess either. Even when her brother dies, she is sad but realizes that she needs to escape the menace of the Rev-9. 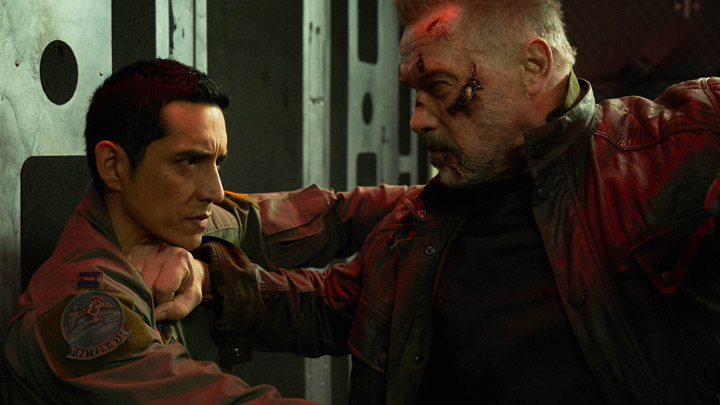 There are a lot of holes in this plot. This is bound to happen when you are dealing with time paradoxes and alternate futures. Why did a Terminator kill John after SkyNet was eliminated as a threat? Why did Sarah’s text tell her to go to a highway to meet the Rev-9 instead of at his place of arrival? Why did Sarah get a text about the Rev-9 and not Grace’s arrival? Yet all of these questions do not detract much from the action.

The visual effects are top-notch as you would expect from the money available for this production. There are scenes in the air and at a dam that are first-rate.

The final sequence brings up the usual dilemma in Terminator films. If the Terminator is so all-powerful, can he be killed? There is a plausible explanation provided, and the plot is tied up nicely.

Mackenzie Davis, who was so good in “Tully,” continues to impress here with her acting. Schwarzenegger effortlessly walks the balance between robotic assessment and unintentional humor. Reyes does a great job as a woman in difficult circumstances who grows into her character as the film progresses.

The big disappointment for me is how Sarah Connor was written. As a jaded mother forever mourning her son’s loss, she comes off as too bitter. Hamilton is fine in the role, but I would have preferred if Sarah were more gung-ho in general.

So sit back and get ready to enjoy the action in the latest Terminator movie.

More than two decades have passed since Sarah Connor prevented Judgment Day, changed the future, and re-wrote the fate of the human race. Dani Ramos (Natalia Reyes) is living a simple life in Mexico City with her brother (Diego Boneta) and father when a highly advanced and deadly new Terminator – a Rev-9 (Gabriel Luna) – travels back through time to hunt and kill her. Dani’s survival depends on her joining forces with two warriors: Grace (Mackenzie Davis), an enhanced super-soldier from the future, and a battle-hardened Sarah Connor (Linda Hamilton). As the Rev-9 ruthlessly destroys everything and everyone in its path on the hunt for Dani, the three are led to a T-800 (Arnold Schwarzenegger) from Sarah’s past that may be their last best hope.

There are a lot of holes in this plot. This is bound to happen when you are dealing with time paradoxes and alternate futures. Why did a Terminator kill John after SkyNet was eliminated as a threat? Why did Sarah’s text tell her to go to a highway to meet the Rev-9 instead of at his place of arrival? Why did Sarah get a text about the Rev-9 and not Grace’s arrival? Yet all of these questions do not detract much from the action.

The visual effects are top-notch as you would expect from the money available for this production. There are scenes in the air and at a dam that are first-rate.