When I saw that there was another “Toy Story” installment coming out in this summer of sequelitis, I had to ask myself what more is there to tell in this story? While the new “Toy Story 4” relies on its traditional action and comedy, it adds an unexpected existential element. I defy you to watch this film and not be moved by the ending.

“Toy Story 3” was an incredible chapter in this saga and was rightfully nominated for an Academy Award for Best Picture. Who can forget the touching scene where the toys join hands as they are about to be burned in the incinerator? At the end of this film, the toys have a new owner, Bonnie, as Andy leaves for college.

The new picture begins with a flashback to nine years ago. RC has been stranded outside during a rainstorm and is about to be swept away. The toys go the window of Molly’s room, where Bo Peep (Annie Potts, all credits are for voice) and her sheep help with the rescue operation. While RC is saved, Bo Peep is boxed up for a new owner. Woody (Tom Hanks) goes outside and almost departs with Bo Peep, but doesn’t.

Flash forward to the present. In Bonnie’s room, she pulls the toys she wants to play with out of the closet. Woody is left to languish in the closet. He collects his first dust bunny, which a clock toy informs him is a rite of passage for neglected playthings.

This is Bonnie’s day to go to orientation for kindergarten. None of the toys are supposed to accompany her to this event, but Woody sneaks into her daypack. At the school, Bonnie is by herself at a table with no crafts to make something. Woody sneaks into the trash and pulls some supplies for her when she isn’t looking.

Bonnie decorates a spork with googly eyes, pipe cleaners, and ice cream scoops and calls him Forky. From the start, Forky has a crisis of identity. He believes that he is trash, since this was his origin, rather than a toy valued by Bonnie. As she returns home, Forky is introduced to the gang but keeps trying to jump into the trash can. Woody always extricates him to be near Bonnie while she sleeps.

The family decides to go on a road trip in their RV. Bonnie takes all of her toys. While traveling, Forky (Tony Hale) continues to try to jump into trash receptacles. He finally escapes from the RV and Woody jumps after him.

Forky and Woody bond while they walk to the amusement park where the family will be staying. Woody shares his wonderful memories of being loved by Andy and Forky starts to learn what it is to be a child’s toy.

While traveling through the town by the park, Woody sees what looks like Bo’s old lamp inside an antique shop. The two sneak inside and are taken into custody by Gabby Gabby (Christina Hendricks) and her ventroliquist dummy henchmen. The mechanism for activating Gabby’s voice box is broken and she wants Woody’s functioning mechanism to repair her own. This way she can be adopted by a child.

Woody escapes but Forky does not. While in the park, he encounters Bo who is now a “lost toy.” This is a toy who is not attached to a child. She likes her new lifestyle and agrees to help Woody rescue Forky.

Buzz (Tim Allen) has left the RV to find Woody. While at a booth on the Midway, he meets Bunny (Jordan Peele) and Ducky (Keegan-Michael Key), who are conjoined at one each of their hands. After some misunderstanding, they join the others to rescue Forky.

It turns out that Bo once lived in the store but escaped. She recruits an old friend, Duke Caboom (Keanu Reaves), who rides a motorcycle to help with the rescue. 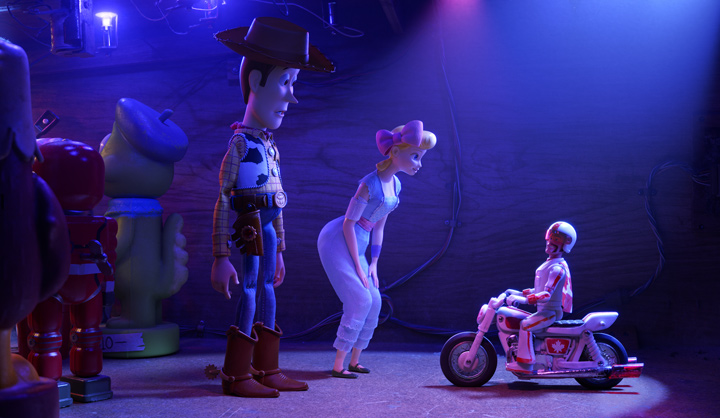 There are two instances of existential crisis portrayed in this movie. One is Forky, who believes that he is his origin, the trash, and not his new purpose, being loved by a child. In some ways, this is an analogue to people with low self-esteem discovering their own worth.

The second crisis comes for Woody. Now that he is not cherished by Bonnie, is his purpose to bring joy to a child? Or can he go off with Bo for personal reasons and become a lost toy?

I found these aspects of the film to be decidedly thought-provoking for a children’s picture. It is these themes that make this edition of the franchise worth making another entry in the franchise. They also lead to a very satisfying conclusion.

Keanu Reaves is perfect as Duke Caboom. He is part space cadet and part suffering soul as he has never gotten over being abandoned by his child because he couldn’t fulfill the expectations of his TV commercial.

Keegan-Michael Key and Jordan Peele likewise are hilarious as Ducky and Bunny. Their banter and antics add so much to the story. Gabby Gabby also turns out to be a more complex character than she initially seems to be.

There are some slow scenes and scenes that fall flat. I also worried about the direction of the movie when Woody was lamenting that he was stuck in Bonnie’s closet. I was afraid that the plot would revolve around a rivalry between favored and unfavored toys. That topic had been explored in previous films, so a repeat was not necessary.

Forky as a character was a little creepy to me. He reminded me of Mr. Bill from “Saturday Night Live.” The ventroliquist dummies also were a bit scary.

Overall, I came out of the theater being deeply moved and satisfied. It has been 9 years since the last “Toy Story” and this one is worthy of the franchise. It should be appealing to all ages and to anyone who has watched the previous pictures.

Stay for the credits. Three and a half out of five stars.

Woody (voice of Tom Hanks) has always been confident about his place in the world, and that his priority is taking care of his kid, whether that’s Andy or Bonnie. So, when Bonnie’s beloved new craft-project-turned-toy, Forky (voice of Tony Hale), declares himself as “trash” and not a toy, Woody takes it upon himself to show Forky why he should embrace being a toy. But when Bonnie takes the whole gang on her family’s road trip excursion, Woody ends up on an unexpected detour that includes a reunion with his long-lost friend Bo Peep (voice of Annie Potts). After years of being on her own, Bo’s adventurous spirit and life on the road belie her delicate porcelain exterior. As Woody and Bo realize they’re worlds apart when it comes to life as a toy, they soon come to find that’s the least of their worries.

There are two instances of existential crisis portrayed in this movie. One is Forky, who believes that he is his origin, the trash, and not his new purpose, being loved by a child. In some ways, this is an analogue to people with low self-esteem discovering their own worth.

The second crisis comes for Woody. Now that he is not cherished by Bonnie, is his purpose to bring joy to a child? Or can he go off with Bo for personal reasons and become a lost toy?

I found these aspects of the film to be decidedly thought-provoking for a children’s picture. It is these themes that make this edition of the franchise worth making another entry in the franchise. They also lead to a very satisfying conclusion.