What a wonderful time to be a comic book fan! From TV to the big screen, the output/quality of entertainment has been truly impressive! In fact, I’m pretty sure old Hollywood never expected such a frenzied response for the superhero genre. Just look at the recent box office returns.

The big question is whether or not viewers will soon experience superhero fatigue. Inevitably all genres experience peaks and valleys and some would argue that the hero genre will eventually falter. Mind you, I highly doubt that will happen. Just look at the recent success of Black Panther and Avengers: Infinity War.

While I thoroughly enjoyed Avengers: Infinity War, it’s anti “Hero’s Journey” heaviness was unusual for the genre and everything Deadpool typically isn’t. Heck, I’m still impressed that Marvel had the stones to stay committed to the Thanos story.

One of the surprise hits of 2016, Deadpool‘s budget of $58 million was peanuts compared to the large money being spent on the X-Men franchise. The film even embraced that idea with jokes about cheap CGI and low budget B team characters. Yet, while Deadpool was great, the villain Ajax was as exciting as a bag of wet potato chips. For me, the movie worked because of witty writing, effective action sequences and the emotional connection to Wade and Vanessa’s relationship.

So with the release of Deadpool 2, director David Leitch has been handed the keys to an exciting franchise where the rules of gravitas need not apply. Just like he did with Atomic Blonde, the former stunt director handles the required action scenes like a maestro. 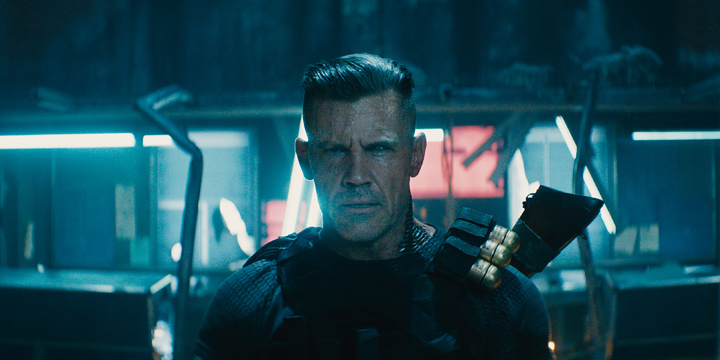 The film starts with a highly depressed Deadpool finally agreeing with Colossus to join the X-Men. On his first mission, he ends up disobeying the hero protocol in trying to save a teen mutant and is arrested and sent to a mutant prison. It’s while at prison Cable (Josh Brolin) is introduced to Wade Wilson. Of course, if you know anything about Cable, the circumstances of his arrival are anything but normal. As a time-traveling mutant cyborg, Cable has returned from the future to stop the same teen mutant that Deadpool saved. High drama ensues.

As Cable, Brolin plays the role with a reserved low key element which really works great against Reynolds over the-top energy as Deadpool. You can tell they enjoyed working together as it shows with the great chemistry they have. Joining the ride is Zazie Beetz (Domino), who manages to steal every scene she’s in. As Domino, her mutant power is luck so you can imagine how great her sequences were. 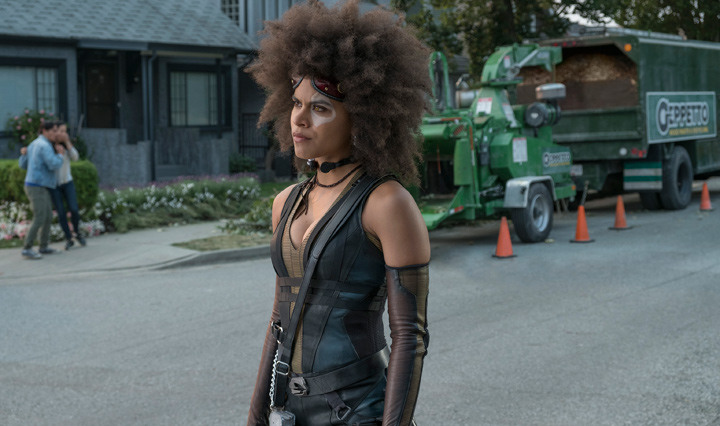 Everything about Deadpool 2 felt more polished and better connected to the source material. The jokes were on point and the fight sequences were better executed than the previous movie. The story, while not overtly original still maintained a good balance of Deadpool zaniness contrasted with the soulful love of Vanessa and Wade. With Deadpool, Ryan Reynolds has found his muse and has parlayed it intro something really special. It’s as if Rob Liefeld created the character just for Ryan.

As has been standard procedure with all things Marvel, the end credits are mandatory and usually worth the wait. If you’ve never waited before, do it for this movie. I haven’t laughed that hard in quite some time. So, make sure to stay until the end!

So, who doesn’t love a sadistic, indestructible wise mouthed anti-hero?

After surviving a near fatal bovine attack, a disfigured cafeteria chef (Wade Wilson) struggles to fulfill his dream of becoming Mayberry’s hottest bartender while also learning to cope with his lost sense of taste. Searching to regain his spice for life, as well as a flux capacitor, Wade must battle ninjas, the yakuza, and a pack of sexually aggressive canines, as he journeys around the world to discover the importance of family, friendship, and flavor – finding a new taste for adventure and earning the coveted coffee mug title of World’s Best Lover.

Everything about Deadpool 2 felt more polished and better connected to the source material. The jokes were on point and the fight sequences were better executed than the previous movie. The story, while not overtly original still maintained a good balance of Deadpool zaniness contrasted with the soulful love of Vanessa and Wade.