Happy Death Day is a film billed as being Groundhog Day with a twist. College student Tree Gelbman (played by Jessica Rothe) finds herself reliving the same day over and over, only in this film the day she relives always ends with her being murdered by a masked figure. After several times of being stuck in this cycle, she confides to Carter (Israel Broussard), a boy she recently met and in whose dorm room she always wakes up, what it is that’s been happening to her. Carter suggests that to break the cycle she must figure out who it is that is trying to kill her. The film then shifts gears to become something of a whodunit murder mystery, mixed with PG rated teenage slasher film tropes. 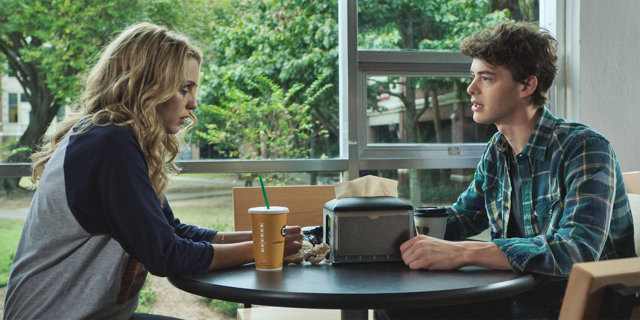 When all is said and done, Happy Death Day delivers exactly what it promises. It’s Groundhog Day mixed with a murder mystery, with a female filling the role previously played by Bill Murray. The murder mystery angle is actually somewhat clever, and I did not see the reveal coming before it happened. Unfortunately, when I heard the film was Groundhog Day “with a twist” it led me to expect a really unique and different take on the theme. Essentially, I thought I was going to be watching a film like The Sixth Sense or The Crying Game, a movie that tries to make its audience think they are watching one type of story and then throws in a twist to make them realize they are watching something else all together.

I expected this film to make me think I was watching Groundhog Day but at a certain point turn out to be something very different. It’s not different, it really is just Groundhog Day redone with a murder mystery thrown in. If that’s what you’re looking for, this movie should fit the bill. It’s well done for what it is, has a good whodunit plot twist, and has a “feel good” ending. If, on the other hand, like me you’re looking for a scary horror movie that subverts the Groundhog Day theme then you’re likely to be disappointed. It’s a fairly mild suspense thriller, not even really a horror movie, aimed at a young teenage audience that delivers exactly what it promises and nothing more.

Blumhouse (Split, Get Out, Whiplash) produces an original and inventive rewinding thriller in Happy Death Day, in which a college student (Jessica Rothe, La La Land) relives the day of her murder with both its unexceptional details and terrifying end until she discovers her killer’s identity.

I expected this film to make me think I was watching Groundhog Day but at a certain point turn out to be something very different. It’s not different, it really is just Groundhog Day redone with a murder mystery thrown in. If that’s what you’re looking for, this movie should fit the bill.