Slice of SciFi reviewer Jackie Zwirn recently had the chance to check out Clowntown before it’s release this week, and took the opportunity to talk to Brian Nagel, one of the film’s leads, and producers.

Jackie Zwirn: What true events inspired the making of your movie?

Brian Nagel: In Bakersfield California, there were over 20 reportings of “creepy clowns” terrorizing residents. Some were spotted holding baseball bats, machetes, and even guns. Needless to say the clown sightings sparked much fear in the locals.

Jackie Zwirn: Why make a movie about murderous clowns?

Brian Nagel: When we were conceptualizing our ideas, one constant thought kept coming back to us. People have opinions about clowns; they are either unbothered or completely terrified. We loved the idea of taking a common, pre-existing fear and further adding to the horror.

Jackie Zwirn: Are the clowns based on any specific clowns or people, such as John Wayne Gacy aka Pogo the Clown or the Bakersfield Clowns?

JZ: It seemed like you were going for a psychological thriller/slasher movie. Was the intention to be more psychological or slasher?

BN: We wanted the movie to be both psychological and slasher. 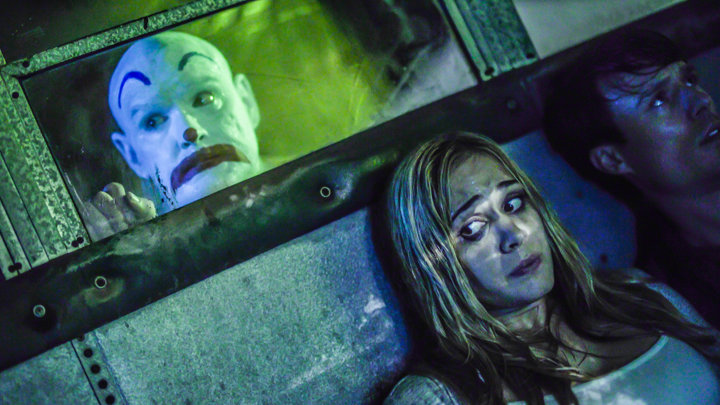 JZ: Did a fear of clowns help inspire this? If so, who’s afraid of them?

BN: We used society’s common fear of clowns to our advantage when developing ClownTown. One of our lead actresses, Katie Keene (who plays Jill), has a genuine fear of clowns, which was fantastic! Her scenes showed raw fear. She suffered from night terrors as a kid, many of which were clown related.

JZ: Where were the police when all this was going on? You think they would have been involved somehow. I understand there was just the one sheriff and he was covering it up but you can’t cover it up that well. And I know the Sheriff was in on it the whole time, (spoilers), so was he a legit Sheriff? Did he have superiors he had to answer to? Why didn’t you show how that was handled?

BN: Have you ever seen the Texas Chainsaw Massacre? Same idea. Small town, corrupt sheriff. He was his own superior. The small town residents knew not to leave their houses at night based on small town myth. Those who were murdered were travelers simply passing through town. Because the residents of the town stay in at night, minding their own business, the murders more or less were unnoticed. We knew there were going to get these questions but we only have a certain amount of time to tell the story and we felt we had to stick with the main loglines and characters. Perhaps if there is a sequel you’ll learn more about that.

JZ: I noticed that the name Nagel was very present in the cast. Was it difficult to work with family members? Was this meant to be a “family affair?”

BN: For me this was a huge blessing. I love my family and the fact that we can bring our talents together is a special thing. My aunt and uncle have been professional actors for over 30 years and I knew they would deliver talent on screen. Who wouldn’t want that? Working with my brother as director was also great. We have a lifelong history of working well together, while practicing mutual trust and respect. We only want the best for each other!

JZ: Which did you like more, acting or producing? Do you plan to continue doing both?

BN: Producing satisfies my business mind and acting my creative side. I love acting, creating a character, and living as that character. I love producing because it gives me the opportunity to help tell the story as well as be involved in the whole film making process. Producing also lets me work with people I enjoy working with. If I had to only pick one it would be acting, but luckily I don’t have to pick.

JZ: What were the clowns reasoning behind the murders other than being crazy? There wasn’t much in the way of back-story: How did this happen to them and why? Why clowns?

BN: SPOILER ALERT: Well in a super small nutshell, at the beginning of the movie with the children and the babysitter you see pretty much the entire house filled with clowns. Clown comforter, porcelain clowns, even a clown costume worn by the young boy. The clown obsession was almost innate in the young child. As an adult he is revealed as the clown leader, and crazy Myrtle’s son. I can get real specific about scientific evidence regarding the sociopathic or psychopathic brain, but I’d rather just stick to the fun movie stuff.

JZ: Are there any thoughts for a sequel?

BN: We will see how ClownTown does and gauge the viewer’s interest. We as a producing team would love to tell more of this story. There is so much in the story to tell!

And, we’ll see if there’s a sequel. They did leave it open for one!

Also see Jackie’s review of “Clowntown”, and LA horror fans can check out the Clowntown cast at a Dark Delicacies signing event on October 15.