Set in Germany (for the most part) in 1989 prior to the destruction of the Berlin Wall, this film falls into the classic “recover the item” spy film genre. If you’re looking for movie comparisons, think: Bond-style mission, Bourne-type action sequences, Haywire-level violence and fight choreography and a Salt-esque twist (all of which barely brush the edge of how this film slips its story into your psyche) that leads you on a mayhem-riddled chase alongside our heroine, experienced and lauded MI6 agent, Lorraine Broughton (Charlize Theron). 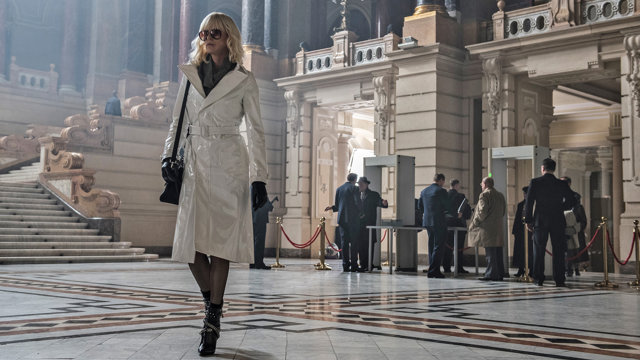 Using the tried-and-true technique of storytelling via aftermath report back at headquarters, Atomic Blonde introduces its players (and layers) in rapid fashion but with a decided flair that visually calls to mind a slicker style of spycraft than the industry’s been treating audiences to of late. Every frame of this film screamed it’s 80s aesthetic loudly and proudly but in such a way that it only served to deepen the atmosphere bringing Berlin to life. A few cinematography though (that blue overlay man) are a little too faithful to comic inking impressions in their attempt to bring graphic novel’s implied edge to life, but overall sets the right tone for taking in this highly stylized story arc.

This movie is less about the intricacies of an unfolding spy-plot – there is one and it’s interesting on its own – and leans more to showcasing Broughton, her hefty skill-set (and assets), alongside her seemingly ill-concealed vulnerabilities. It’s not a bad tactic for a movie taking a shot at becoming a franchise. The runtime is a little long – but not overly burdensome – but the soundtrack and scene switches keep the pace from dragging too much. More-to-the-point, I can’t think of much that could’ve been trimmed without losing something the story needs; Kurt Johnstad’s screenplay already cuts it (a little too) close to the bone.

The nuances in the Broughton character, however, may be too slowly revealed to create a connection for some audience members. I like hard-nosed brashness – especially from a female lead – as a form of character development; but it has been known to cause more than one critic and viewer to accuse a movie of lacking “depth” in the past so I expect more than a handful of people to make that complaint here.

To that I say: 1) it’s a summer blockbuster-wannabe, 2) she’s been dropped into a mission off the rails before the opening film credits begin, 3) read the graphic novel if you need the panels laid out in a less confusing but no less convoluted order, 4) for goodness sake not every spy movie has to give up all its secrets before the third act, and 5) if She were instead a He, you’d be all for letting the emotional aspects take a back seat instead of being the dominant character component and story focus. 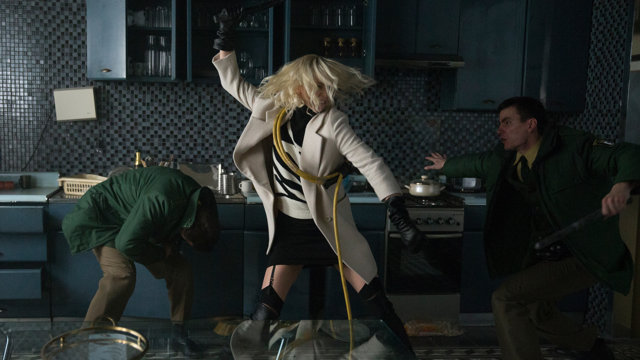 I can also see some being disappointed at not receiving more of the background details of this particular mission and it’s players because the characters back at in the home office are clearly up to something interesting and Eddie Marsan’s portrayal of “Spyglass” is tricky and subtle.

His role does throw out signals and signposts with more than a whiff of intrigue just outside the frame but this isn’t a John Le Carré drama adapted for film, so if you’re expecting the story to unfold in that fashion or display these type of spy story elements as it plays out, you’ll still be waiting when the credits roll. That said, Atomic Blonde isn’t opposed to a red herring (or three) in furtherance of its overall story development. Will you fall for any (or more like how many) of them is the real question.

Theron deliberately portrays Broughton as icy, sultry, emotionally disingenuous and detached. She’s not here to make friends or win over her enemies (but let’s be real if she decides to seduce you, you’re telling her everything you know). This character direction may at turns keep you from investing in her but that’s not necessarily a bad thing because it’s the story unfolding as a whole that’s intended to tell the tale.

Don’t look for long scenes intended to reveal the inner-workings of Broughton’s mind, this story employs comic panel fast flip and freeze-frame techniques to illustrate what motivates its characters almost exclusively – and quite well. This is a woman fully-seated in her power and dammed if it isn’t something to see – but they don’t overly parce out many more of her layers for you to ponder. 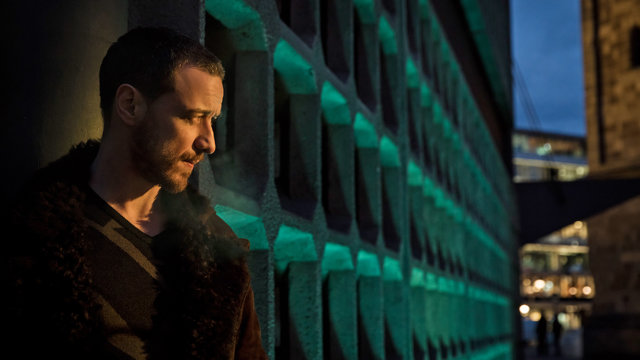 Juxtaposed to Theron’s utterly cold (but certainly not dead) affect is, the bombastic and devilish agent David Percival (James McAvoy). As the Berlin Station Chief, Percival’s been acting without oversight for a long time. His superiors describe him to Broughton as having “gone native.” McAvoy gives a high-energy, (deliberately) laconic and distracting performance. His dialogue is some of the most faithful to the source material as well. I do feel like his part was a times too thin and could’ve been better used to send up more than a single flare at a time to aid in telling the story at a ground-level.

Percival seemingly obvious part in this mission gone awry is anything but that and if you write him off as being around for flash (first of all what’s wrong with you, it’s James McAvoy) and humor you’re going to be kicking yourself in the end when you realize you missed a large chunk of the plot-in-motion. If you ignore his by-play, you’re more than likely to also be confused in the end.

The rest of the cast ably supports the mystery-within-a-mystery unraveling through the film and aids in creating an environment where trust is in question and loyalties are murky at best. Towards the end, you get a slight impression of the more going on behind the brash fighting and bombastic by-play of the most recent mission. It’s a tease of something more about Broughton’s brand of spycraft that’s as close as this film will come to revealing any of its tricks you may have missed along the way. Not to mention swinging the door for another film wide open.

Nothing about Atomic Blonde is complicated but it’s not just an empty crash/bang/pow either but if you’re looking for the movie to hold your hand through its twists and turns (I read comics, so I may be biased in favor of this type of noir-edged storytelling) in between the in-your-face action, then you may leave convinced this film has no real story or connective thread. To that I’ll say, you blinked because even the ironically selected 80s songs take on a part of telling this story; and I have to say, George Michael’s “Father Figure” hasn’t ever been used better.

Based on the graphic novel “The Coldest City” by Anthony Johnston, Atomic Blonde is a return to the cold-war era spy genre with a heroine at the top of her game and unafraid to get her hands (very) dirty to get the job done. It’s a slick, smokey, neon-driven (literally) introduction to bold spycraft master Lorraine Broughton and the world of espionage she thrives in. This film is obviously intended to be the beginning of something more and, though not without its faults, I say it’s a good start for Johnston’s spy tales on the big screen.

Go, have fun, then come back and tell me if you caught all the misdirects. Just remember: “this is the game”…

sidenote: I see it as Atomic Blonde’s intersectional duty to prove brash female leads can be “a thing” again. Because there are a bevy of kick-ass women of color *cough, cough-Misty Knight-cough, cough* in comics I’d love to see use this crack in the door to push their way on to the big screen.

The crown jewel of Her Majesty’s Secret Intelligence Service, Agent Lorraine Broughton (Theron) is equal parts spycraft, sensuality and savagery, willing to deploy any of her skills to stay alive on her impossible mission. Sent alone into Berlin to deliver a priceless dossier out of the destabilized city, she partners with embedded station chief David Percival (James McAvoy) to navigate her way through the deadliest game of spies.

Atomic Blonde is a return to the cold-war era spy genre with a heroine at the top of her game and unafraid to get her hands (very) dirty to get the job done. This film is obviously intended to be the beginning of something more and, though not without its faults, I say it’s a good start for Johnston’s spy tales on the big screen.

Go, have fun, then come back and tell me if you caught all the misdirects. Just remember: “this is the game”…