Okja is a fable – at least if feels like one – about an giant animal raised in the simple but idyllic surroundings allowed to run wild and free in the mountains of South Korea. She’s been raised and cared for with love by a young girl, Mija (An Seo Hyun), who’s her constant companion. 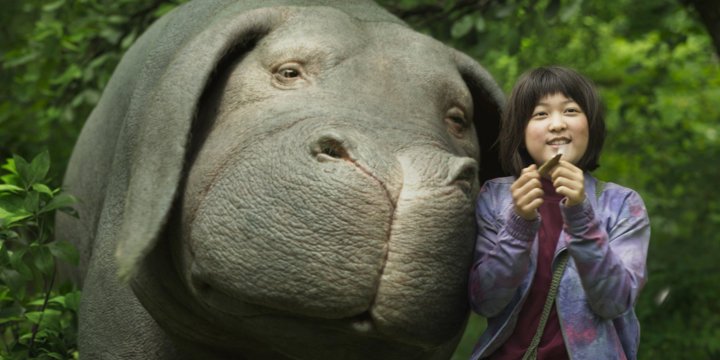 But she isn’t a pet, Okja’s a contestant in corporate competition and the company’s not looking to corner the animal companion market.

In the hopes of overhauling its corporate image and overcoming its robber-baron roots, the Mirando Corporation sent 26 babies of a “newly discovered” species to farmers around the world to be raised for 10 years.

Mirando’s newest CEO, Lucy Mirando, is intent on convincing the world that under her leadership, Mirando Corp.’s a GMO free, environmentally friendly paragon of capitalism working to solve the food shortage, looming on the horizon, for consumers. These “Superpigs” are the solution…

Tilda Swinton’s bracingly bubbly, slightly disaffected Lucy Mirando is a brilliant caricature of the greedy corporate head of industry intent upon being a beloved icon in the public eye. If she reminds you of anyone, it’s purely coincidental as this isn’t an uncommon desire among the rich, powerful, but dying to be popular crowd. Lucy desperately wants to outshine her sister Nancy, the last CEO, and her energy reflects her frantic need to be liked, be successful, and not be called psychotic… Swinton’s performance is, at times, deliberately disjointed – like she’s a marionette whose strings are just outside the visible spectrum. You’re almost convinced she sits like a broken doll in a corner somewhere in between moments of being “on” in front of the bright lights and crowds.

The duality of her persona is set into sharp relief when set against the subtle machinations of her smooth and suave right-hand man Frank Dawson (Giancarlo Esposito) and at stark contrast to her portrayal of Lucy’s twin the unapologetically ruthless Nancy (also played by Tilda Swinton). 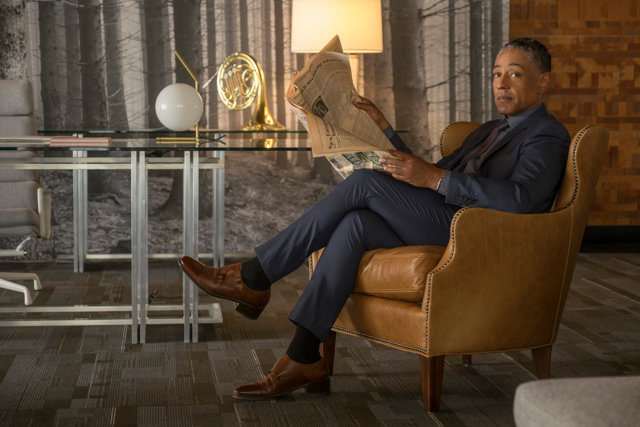 After this game show like opening, the scene shifts to the mountains of South Korea where we see a grownup Okja for the first time. Okja is a rotund, hippo-sized animal with a puppy-esque quality and the joyfulness of dolphins at play (assuming of course those pods of dolphins we see happily leaping at sea aren’t actually death squads returning to home base from some nefarious dolphin mission… ok, that went left) and a marked intelligence.

Mija believes she’s liberated Okja from the Mirando Corp. so, when a film crew and television personality Johnny Wilcox (Jake Gyllenhaal) show up with Mundo Park – the analyst responsible for collecting Okja’s data – Mija’s confused. Johnny Wilcox is there to announce the winner of the Superpig contest and take the winner, Okja, back to headquarters. Mija is the last to know that her friend’s days of freedom (and living) are now numbered.

This is Jake Gyllenhaal as he’s rarely (if ever) been seen on camera. His geekish, self-absorbed, semi-maniacal portrayal of a mostly-washed up television animal expert borders on the slap-stick. 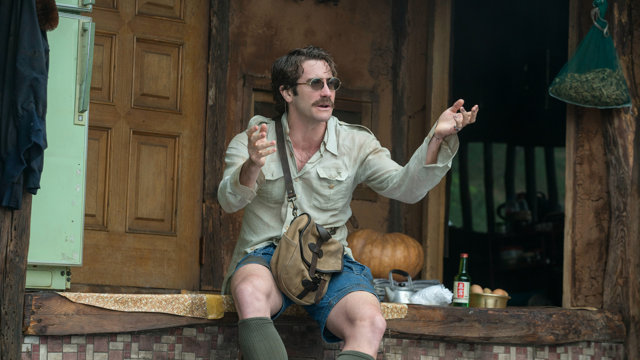 Johnny Wilcox is deliberately cartoonish (it’s his trademark) and as the film progresses and his complicity begins to overwhelms him, his behavior becomes even less cohesive. It’s equal parts hilarious and harrowing. He literally comes apart at the seams on film. His performance is a jarring note in among a range of subtle and nuance character portrayals but given that he’s playing a man who existed as an overblown caricature of a person to begin with, it felt somehow fitting that as the mood of the film went to dark places, his inability to reconcile his conscience with his actions would turn him into an over-emotive hot mess of crazy. It’s a deliberate step outside the tone of the unfolding drama which further serves to cast the action and intentions of all the involved parties’ around Mija and Okja in a justly ominous light. It does more to drive home the horridness of the choices being made than many of the more overt moments because of its disturbing outlandishness.

The heart of Okja is about Mija’s all-out offensive to save her friend and bring her back home to their mountain. Along the way, she flees her well-meaning grandfather, heads to Seoul, gets rowdy (this little girl threw herself into more than just the role for this film), then meets the ALF, a group of animal rights “freedom fighters” lead by Jay (Paul Dano), determined to expose the evils of the Mirando Corp. and use Okja to do it.

Inserting this group into the narrative brought a needed outside element. It elevates this film to a story beyond the linear arc and deepens the exploration of the corporate/consumer often combative power dynamic and relationship without being heavy-handed. I don’t know if it was intentional, but the ALF members are a living embodiment of the white savior trope shown for what it truly is. A self-indulgent belief that its morals and goals are not only somehow superior and therefore their actions are also just and justified but despite being interlopers, they know best how to save us all. The moment when this group must face its own culpability in the harm done to others is poignant and well placed.

Mija is duped, lied to, and used at every turn but never ceases in her battle to be reunited with her superpig best friend (if you want to know what “ride or die” really looks like, Mija is an object lesson in action).

The final act of the film is like a macabre stage production with its message front and center for your viewing consumption. Okja is never preachy but the undertones driving the plot and more than a few character’s overt motivations is unmistakable. But, it pushes through to the end remembering this is ultimately a story about a girl, her superpig and their journey in all the best of ways.

Okja takes its theme(s) and gives us a highly developed satire that plays out like a parable and feels like a much-needed invitation to reexamine how we see ourselves not only in relation to each other but to the greater world around us without trying to shove its objective down our throats.

Okja is how do you present something clearly controversial in nature to the masses in a way it can be received and processed without sparking project killing hostility or acrimony. It’s an unsettling, and at turns uncomfortable, tale but it’s beautifully told and spectacularly handled.

Note: This film is a mix of subtitles and dialogue in English; be sure you’re fully dialed in when you sit down to watch otherwise, you may miss something important (I really want to be quippy here but it would be a spoiler so… sigh, I won’t).

The world’s population is ever-increasing and food sources are in increasingly short supply. Of course, no one wants to talk about how we’ve compromised farmland soil, polluted water sources, permitted large corporations to privatize, then consolidate ownership of food production because, well… then we’d have to own the problem…

Bong Joon Ho is a South Korean director and screenwriter best known stateside (to mainstream film viewers) for his film Snowpiercer (based on the graphic novel by Jacques Lob, Benjamin Legrand and Jean-Marc Rochette).

Under his direction, Snowpiercer came to life with edge and nuanced handling of class issues creating a visually stark, dark dystopian masterpiece.

If ever there was a director looking to take on the subject of capitalism, greed, and consumption, in the age of propaganda and pageantry, with sharply honed satirical panache, after Okja, Bong Joon Ho’s name is on that list…I’m pretty sure, right now, he is the list.

I had the opportunity to watch it early on the big screen (there’s a limited engagement run to make the film for award submission) and I cannot recommend adding it to your queue enough.

For 10 idyllic years, young MIJA (An Seo Hyun) has been caretaker and constant companion to Okja—a massive animal and an even bigger friend—at her home in the mountains of South Korea. But that changes when a family-owned multinational conglomerate Mirando Corporation takes Okja for themselves and transports her to New York, where image obsessed and self-promoting CEO LUCY MIRANDO (Tilda Swinton) has big plans for Mija’s dearest friend.

With no particular plan but single-minded in intent, Mija sets out on a rescue mission, but her already daunting journey quickly becomes more complicated when she crosses paths with disparate groups of capitalists, demonstrators and consumers, each battling to control the fate of Okja…while all Mija wants to do is bring her friend home.

Okja is how do you present something clearly controversial in nature to the masses in a way it can be received and processed without sparking project killing hostility or acrimony. It’s an unsettling, and at turns uncomfortable, tale but it’s beautifully told and spectacularly handled.