I love superhero movies. I grew up on comics, stealing my brother’s all the time and so when I watched the trailer for this Italian genre movie, I was incredibly intrigued. Would it bring something new to the genre and how would it compare to the big movie blockbusters we have in America? This little film more than stacks up against the big names and while unusual, it is worth watching if you like a mix of anime and superheroes, all combined in one movie.

“They Call Me Jeeg Robot” begins with a petty criminal Enzo (Claudio Santamaria) running away from the police in Rome. He jumps into the river Tiber to escape and falls into a barrel of radioactive goo, giving him super strength, durability, and healing abilities. He’s a thief, so of course the first thing he does with his new powers is cart off an ATM full of money.

As he figures out what to do with his newfound abilities, Enzo meets Alessia (Ilenia Pastorelli) the daughter of a criminal friend. Alessia is obsessed with the anime Steel Jeeg. Alessia loses her father and latches onto Enzo, believing him to be the hero from the anime, Hiroshi Shiba. As Enzo grows to care for Alessia, he begins taking an interest in helping others and develops a relationship with Alessia. 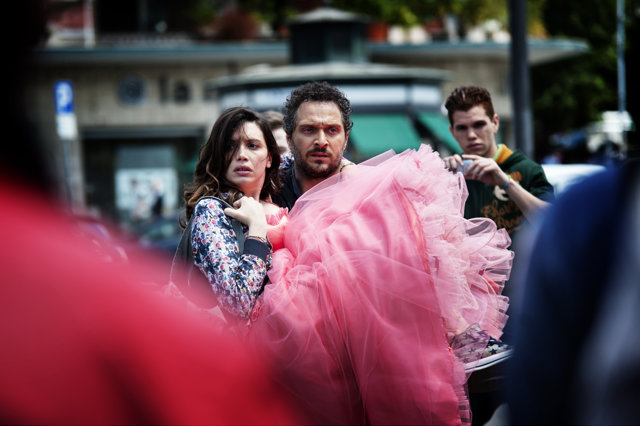 As Enzo begins doing more with his powers, people take pictures of him, posting them on YouTube. He also runs afoul of a band of criminals led by a madman called Fabio aka The Gipsy (Luca Marinelli). Fabio is trying to build a criminal organization but Enzo keeps interfering. Fabio finally goes after Enzo, tired of losing to him and determined to acquire abilities like his adversary’s.

“They Call Me Jeeg Robot” is a strange but wonderful mix of anime references, the hero journey and a superhero origin story all in one. The more I saw, the more I liked it. It isn’t straightforward. Enzo starts out as a petty robber, someone who has lost all interest in the people around him. It is only through Alessia’s influence that he begins caring and connecting to humanity again. It is her worship of him and disappointment in him that builds him into a hero. That and Fabio, the madman because you can’t have a good superhero movie without a good villain to go fight him. And The Gipsy is a good villain, psychotic, gleefully dancing as he mows down the people who have crossed him, Fabio is absolutely the antithesis of Enzo. He is the more passionate of the pair but that is what makes the film intriguing.

The journey that Enzo takes to become a hero is part of what makes this movie work. Enzo falters and takes missteps along the way and he experiences loss. When he finally makes the decision to help the people of Rome, it then becomes more impactful and more exciting. Despite the lack of a large budget, this is a good superhero movie made more interesting by some incredibly good acting.

Claudio Santamaria is excellent as Enzo, desperate to escape the police and his interactions, his chemistry with Ilenia Pastorelli who plays Alessia is tender but human, Alessia teaching him how to treat a woman. Ilenia Pastorelli is engaging as Alessia, an unbalanced young woman who latches on to Enzo. She plays Alessia as sweet but damaged all at the same time. And it is clear that her character is instrumental to Enzo’s growth. Luca Marinelli won awards in Italy for his portrayal of Fabio and you can tell. He is frenzied and demonic, an attention seeking madman, perfect in his role. 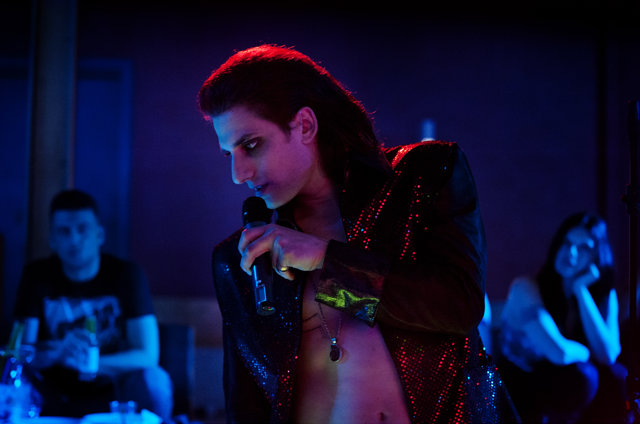 The plot while rich with foreshadowing and characterization can be confusing at times.This might be partly due to a language. The movie is subtitled and without knowing the language, I could be missing subtle nuances. However, as the movie begins, we aren’t told who Enzo is or why he is running from the police. We do eventually learn more but some of the introduction seems to be only to set up how he gets his super powers. We learn far more about Alessia and Fabio than we do Enzo and while it seems strangely appropriate for his transformation into Alessia’s hero, it was something that threw me out of the story. Some of the cinematography is rough, being a low budget movie and some of the effects, like wounds that Fabio receives, are played for a bit of comedy instead of being realistic, such as a very bad wig he wears to cover up some burns. That said, the way Enzo’s abilities work is done well, as he uses leverage to pick up larger items and has to hit a target multiple times to break through a wall. I like the use of real physics in my superhero movies.

Overall, American audiences might struggle with the subtitles but if you like anime style superhero movies, you might like this film. It is a touch campy at times but it has superpowers that are realistic; it is quirky and original. Enzo’s heroic journey is beautiful to watch as is the relationship between him and Alessia. Their love story is human and touching and the villain, Fabio, is pure adrenaline crazed fun.

Enzo, an ex-con from the poor outskirts of Rome, puts his newfound superpowers to use furthering his career as a delinquent, a fact which makes the local crime bosses far from happy. When he falls in love with Alessia, an unstable girl who brightens her dark world with elements from a Japanese anime, Jeeg, Enzo learns the value of helping others. But what price must he pay to become a hero?

They Call Me Jeeg Robot

American audiences might struggle with the subtitles but if you like anime style superhero movies, you might like this film. It is a touch campy at times but it has superpowers that are realistic; it is quirky and original.